After a 17-hour police chase in Sapporo on Thursday, Yasuyuki Suzuki eventually gave himself up. He called the police station from his mobile phone and said, â€œI give up. I’m yours.â€

The mammoth chase involved 18 police vehicles, and two helicopters. And one police officer tried to make excuses for the failure to catch Mr. Suzuki, claiming that, â€œWe could have arrested him earlier if we had skimmed our vehicles against his, but we were afraid of involving the public.â€

How on earth a chase of this magnitude could go on for 17 hours I don’t know, unless perhaps they had come to some agreement on rest breaks and toilet trips. But go on for this long it did, and if the suspect hadn’t given himself up, we can only speculate on how much longer it would have dragged on for.

And the crime Suzuki-san was eventually arrested for? Murder? Rape? Wonton death and destruction? No, he’s on the wanted list on suspicion of stealing a DVD player from an electrical shop in April. It was a good one though, it retailed at 40,000 yen. About 200 pounds. 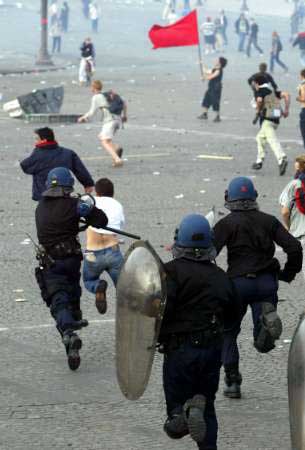 Above is a picture of a similar chase yesterday. A group of policemen close in on a suspect alleged to be a week late paying his gas bill.