Whilst the Japanese style toilet remains a rather primitive contraption, the new Western style thrones are packed with more gadgets than you can shake a stick at.

A washing and drying service is now almost standard, and some of the flashier designs come with movement masking sound effects. And the heated seat option is a much sought after luxury in the cold winter months.

But Toto Limited has raised the bar even higher with their â€œNew Neorestâ€ series. The company claims that it’s the first toilet in the world to release an aroma and play soothing music. Plus of course the usual washing and drying facilities. 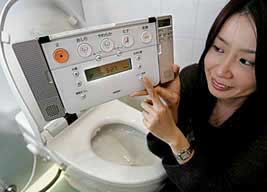 So for those having a bit of a tough time on the toilet, they can now happily mask their efforts with both music and smell. Then finish proceedings off with a nice wash and dry. Leaving the bathroom fumigated, fresh, and free from embarrassment.