Whilst wrangling with all manner of wrong-doers in his U.S. based adventures, 24’s Jack Bauer faces a far sterner task in Japan — furiously fending off silly at best ‘storylines’ plus at the same time being force-fed disgusting dietary snacks.

Yet having manfully manoeuvred himself through the women-only carriage of a commuter train in an earlier escapade, our hero has now been set an even tougher task — politely turning down his side-kick’s kind offer of a souvenir whilst at the same time running for a helicopter, and, it goes without saying, enjoying a noticeable nibble of his favourite foodstuff. 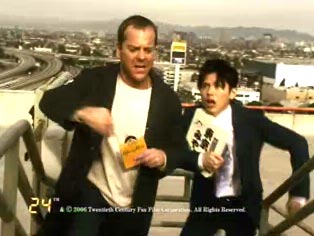 Click the image to see how Jack fares, perhaps pausing briefly to marvel at the presumably massive sums of money used to seduce Mr. Sutherland.