Japan may well be the world’s largest importer of Beaujolais Nouveau — having overtaken the United States in 2004 — but it appears that many Japanese wine drinkers have begun to wake up to the fact that despite all the fanfare, the fruity tipple is more than a tad overrated.

So much so in fact, that a group of wealthy wine lovers in Hakone, near Tokyo, opted to rather wastefully have a wash in the stuff. 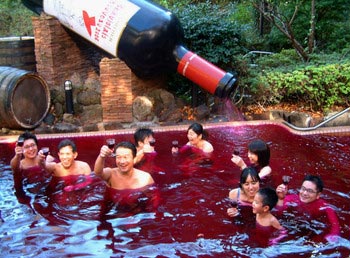 One off the group cheekily chirping, â€œAt least it has a bit of body now.â€