As it’s possible to get away with bull sumo, and even a version of the sport involving crying babies, I suppose a stag beetle sumo contest shouldn’t raise too many eyebrows. 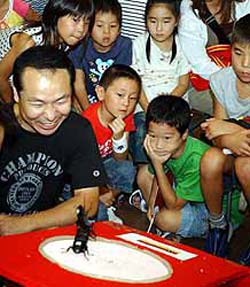 The tournament, recently held in Tokyo’s popular Odaiba district, pitted the horrible looking beasties against each other; some beetles really getting into the spirit of the competition, deftly clamping onto their opponents and flipping them over. A feat that presumably drew hoots of pleasure from the enthralled crowd. Perhaps even the odd high-five. Other contestants however failed to grasp the finer points of the sport, scuttling out of the ring as fast as their numerous little legs could carry them.

The competition was probably organized to cash in on the increasing popularity of the video game Mushi King, and the multitude of cards that accompany it. A title that allows game players to control a variety of beetles in a format similar to sumo. However one game-loving youngster went as far as saying, â€œThe video game is not the same as the real game.â€

That said, the middle-aged man overseeing the fight appears to be having far more fun than the rather bored looking kids in the audience.