In the never-ending battle to keep consumers chomping on its fatty foodstuffs, snack maker Tohato has produced Jyagasane — a bacon and black pepper ‘combination potato’.

Perhaps feeling that customers were tiring of conventionally flavoured snacks, the company has ingeniously made one side of each potato chip (or crisp from where I come from) taste of bacon — the other of black pepper. Tohata claiming that depending on how you eat it, you’ll get a different combination of flavours. Providing it’s either bacon or black pepper based of course. 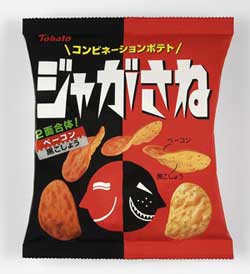 For reasons unknown, Jyagasane is only available in Tokyo, north Kanto, Koshinetsu, Tokai and Hokuriku areas.