Maybe it’s the upcoming festive season, or that the previous form was far from fetching, but with another new look in the space of a month, Tokyo Times is arguably changing as fast as Japanese fads.

Still, with its clean form and colossal Hello Kitty header, this one is a keeper — for now.

Hopefully everything will work, although if there are problems please leave a message or send me a mail. And, in the meantime, here’s a model from the Tokyo Motor Show sporting almost as much white as the site.

Fashion in Japan certainly changes quicker than the face of Tokyo Times, but in a desperate attempt to appear up-to-date, I’ve launched a new look. Hardly a drastic change it has to be said, but it is different — sort of. Miniaturising the Hello Kitty header was a major decision though, and if it’s missed I may have to go back. Basic isn’t always best.

Anyway, hopefully everything will work as it should, but if it doesn’t please leave a comment. And in the meantime, here’s a far more fetching redesign by motor car maker Suzuki. The company’s new model currently making more than a few waves at the Tokyo Motor Show. 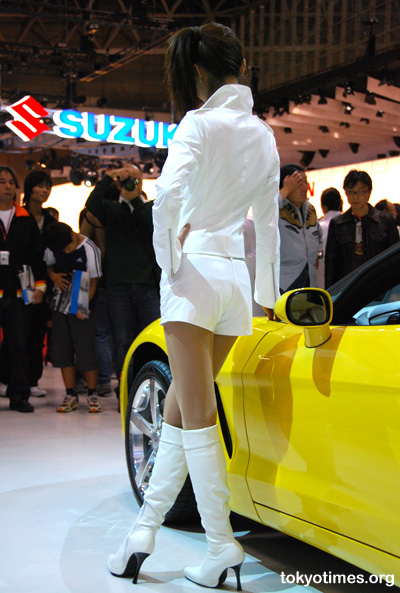 Apologies to those who may have seen this picture when it was briefly posted yesterday. A few major issues meant that it quickly had to be yanked, so to speak, until the problems were solved.