Somewhere in the region of 100 watches were stolen from a jewellery store in the city of Tokushima over the weekend. The hefty haul estimated at around 36 million yen (175,000 pound).

Now whilst such an incident is hardly uncommon, when the location of the shop is taken into consideration, it is probably enough to warrant at least a gentle raising of the eyebrows.

Using a stolen car to smash through the store’s metal shutters, one can confidently assume that the robbers made a fair bit of noise. A racket that would have been especially noticeable at 5 o’clock in the morning. Yet rather surprisingly, not loud enough to disturb the carefree coppers stationed nearby. Yes, just 100 metres from the scene of the crime is a police box, but the on-duty officers went on the record as saying they didn’t hear a thing. 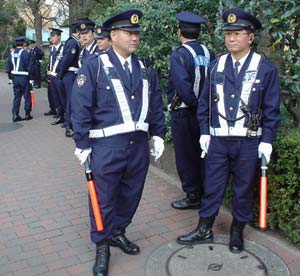 Not a dicky bird.