Wednesday saw the start of the government’s summer saving campaign, with bureaucrats and politicians being encouraged to dress casually in a bid reduce energy consumption. The relaxed dress code has rather optimistically been dubbed Cool Biz, and to mark the occasion, the nation’s wavy-haired Prime Minister ditched his jacket and tie for a relatively tasteful Okinawan shirt. Although the lack of neckwear must have been slightly distressing for Mr. Koizumi, as he appears to have made up for its absence with a rather large and gaudy rosette. 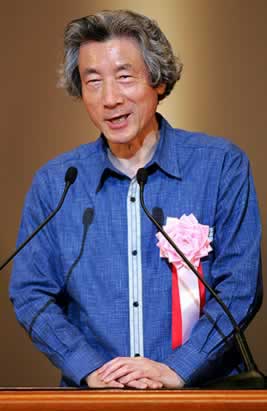 Despite the Prime Minister leading the way, not everyone was ready to ditch the tried and trusted shirt and tie. One bureaucrat from the Health, Labour and Welfare Ministry showed a distinct lack of initiative by saying, â€œWe haven’t received any specific orders from our bosses. Today is the day when we are supposed to change to summer wear, so I want to decide later (whether to go without a jacket and tie) while looking at what my colleagues do.” With another man from the same department grumbling, â€œIt cost more to buy clothes that look nice without a tie.â€

However such dull and unimaginative approaches to the new campaign appeared to have been shattered earlier in the day, when Foreign Minister Nobutaka Machimura said, “I’m surprised that my clothes have created such a stir.” Conjuring up images of the 61-year-old politician cutting a dash in a stylish Versace outfit. Or perhaps wowing young officials with a daring Vivienne Westwood design.

Yet sadly (and rather predictably) this wasn’t the case. Quite the opposite in fact. Machimura-san it turns out wore a lackluster blue business suit and a checkered shirt. A look — and the reaction to it — that says a great deal about the state of Japanese politics and the pedestrian approach to policy making.