Perhaps in a bid to make people think that Japanese ‘scientific’ whale hunting isn’t really that bad after all, fisherman in Wakayama Prefecture have been conscientiously continuing their regular cetacean cull; a busy day on the boats last Saturday alone resulting in around 128 dead dolphins.

Yet it may not be only the dolphins that suffer from such activities, as the potentially high levels of mercury in the resultant meat is far from healthy. A fact that prompted Health Sciences University Professor Tetsuya Endo to confess, “To be honest, I’m worried about people who eat too much of it. There is a range in the concentrations (of mercury in meat) and averages may be low, but a consumer may have bad luck and get a high-density serving. Japanese people have their choice of food. Why eat something dangerous?”

But despite such choice people still eat the stuff, with supermarkets preparing the product by balancing the amount of fat, meat and skin in each portion. A delicacy that may not look to be bad in its traditional setting of a miso-flavoured stew, but in its natural form, ‘appetising’ isn’t exactly the first word that springs to mind. 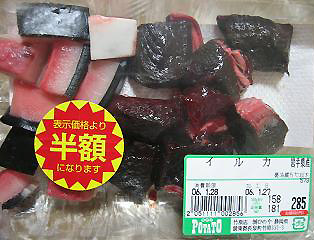