This coming Thursday marks the start of the official Mount Fuji climbing season. Not that you can’t climb it any time you wish, but unless you know what you are doing when it comes to climbing mountains, the next 2 months are the ideal time to give it a go. If you really want to that is.

Ascending Fuji-san has a fair few advantages and disadvantages. Perhaps the main disadvantage (apart from slogging up the mountain for 7 hours or so) is that up close Fuji isn’t all that pretty. Although that’s something of an understatement, as basically it’s ugly and strewn with all kinds of rubbish. Those postcard images of a snow capped conical beauty are hard to imagine when you actually get on the mountain itself.

Also, if you choose to make a bid for the top during August, be prepared to deal with thousands of other like-minded individuals. Get your timing wrong and you are going to find yourself in a slow moving and very frustrating queue for the top.

But like I said, there are advantages. Well, a few anyway. First off, imagine the sense of awe and wonder you’ll feel upon reaching the top and finding numerous vending machines placed there just for your convenience. Dispensing all kinds of tasty hot beverages, and if you are partial to it, canned corn soup too.

But if that doesn’t amaze you, I’m sure the ramen shop that opens just before sunrise will at least raise an eyebrow. I’m not joking here. There is actually a restaurant on top of Mount Fuji. Ok it’s no 5 star establishment, but it serves hot and (relatively) tasty ramen. So in my book that’s a restaurant. And at some ungodly hour in the morning, after just climbing the mountain and finding it a lot colder than that you expected, that humble little shack looks like the most enticing eatery you could ever imagine.

And if these man-made wonders don’t make the jaunt worthwhile, there is always the view. 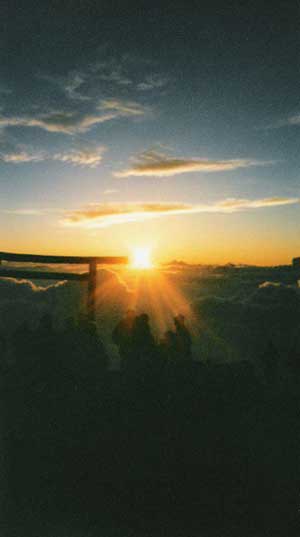