Generally when it comes to fraud, its perpetrators don’t lack imagination. So it probably won’t surprise anyone to hear that a golfing hole-in-one swindle has recently been uncovered in Kumamoto Prefecture. And whilst the amount of money in question isn’t that huge, for a few pleasant and relaxing rounds of golf, 1.5 million yen (7,500 pounds) isn’t a bad haul.

As a bit of background information, it’s not uncommon for Japanese golfers to take out insurance. With good reason too, because in the event of nailing a hole-in-one or an albatross, the (un)lucky golfer is expected to buy their fellow playing partners expensive memorial gifts. With the emphasis placed very much on expensive.

It was this golf insurance that gave Messrs. Fujimto and Shigaki the idea for their great golfing scam. In August 2002, being a good friend and all that, Shigaki kindly dropped Fujimoto’s ball in the hole while an accompanying couple and the group’s caddy were looking for a ball. This generous gesture went down as a hole-in-one on Fujimoto’s card, and netted the pair a cool 750,000 Yen. Easy money it has to be said. 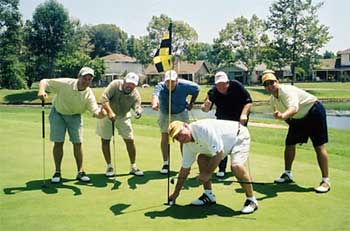 But the police suspect that this wasn’t the pair’s first foray into golfing no good. As in June 2000, Shigaki is alleged to have hit a decidedly wayward shot and led the all too trusting caddie away with him to search for it. In the meantime, his sidekick Fujimoto picked up his own ball and casually dropped it into the hole. Which on the return of the caddie he claimed as an unprecedented albatross. A shot that netted another 750,000 yen.

How the police will eventually prove all this I don’t know, but I suspect the two men aren’t the first to adopt such a carefree approach to the rules of golf. After shooting a mind boggling 34 on his first ever round of golf, I suspect that the diminutive Kim Jong-Il might just have adjusted his own score card in a similar manner. Either that or beneath the famous bouffant and jumpsuit lies a sporting talent of the kind the world has never seen before.