Japanese TV ‘characters’ come and go at an alarming rate, but comedian Razor Ramon’s alter-ego, Hard Gay, has taken the nation by storm. The hip thrusting ‘homosexual’ showing both determination and staying power. 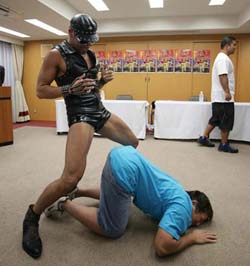 Yet Hard Gay’s immense popularity may well be his downfall, as a sexual minority network has complained to entertainment giant Tomy for producing a game based on Razor Ramon’s creation. In fact, so incensed is the Kyoto-based group, it has demanded that the company immediately cease production of its unique version of the popular kurohi-gei Kiki Ippatsu game. 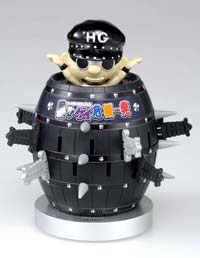 As the toy involves putting a person in a barrel and then gleefully prodding them with swords, the group claims that such behaviour will become associated with homosexuals; the combination of gays and random poking become inexorably linked. Giving rise to fears that children may think that discrimination against sexual minorities is fine.

Tomy has failed to say whether or not it will halt production of the game, but a spokesperson for the company said. “We have taken the matter seriously, and want to respond. The concept of the game is not to stab people with swords, but rather it is to have the character jump out from the barrel. We want to explain that there has been confusion.”

Alleged complaints from the Tokyo-based Pirates Against Persecution about yet another version of the sword and barrel based toy have yet to be confirmed. 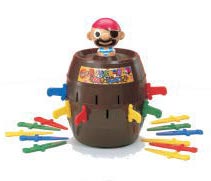