Today is a national holiday; and as is the custom here, it has a name/purpose — Respect The Aged Day.

This year the day off falls at a rather apt time, as figures have just been released stating that by the end of September — barring any untimely falls or bouts of pneumonia — the number of centenarians in Japan will reach 25,554. Meaning there’s going to be an awful lot of ‘respecting’ going on.

Not surprisingly women make up the majority of this hardy bunch, accounting for a whopping 85% of all those who reach this memorable (or not as the case may be) milestone. Old salary man Suzuki having usually popped his clogs a long time before reaching 100; the years of excessive overtime and marathon commutes exacting a decidedly terminal toll. 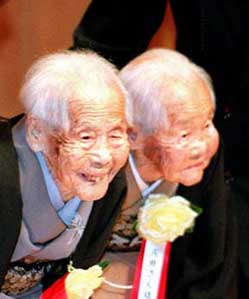 This geriatric gang is a relatively modern phenomenon, and has been increasing in numbers for the last 35 years — steadily growing each and every year. The fact that there were only 153 centenarians in 1963 proving how exclusive the club once was.

The oldest person (as of writing) is 112-year-old Yone Minagawa. Although as impressive as this is, Mr. and Mrs. Semba’s record for the world’s oldest couple is even more staggering. Yae Semba plods along at a sprightly 100-years-old, whilst her husband Nisaburo clocks in at an impressive — and statistic contradicting — 107. The pair narrowly edging out Yoichi and Gomi kazono of Kanagawa. A couple that also boasts a combined age of 207. 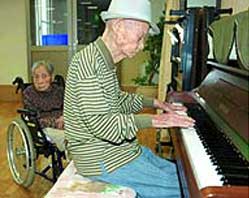 Now this is all well and good, but having already lived here for seven years and in no rush to go home anytime soon, will some of this longevity rub off on me?

It’d certainly be nice to think so.