I can vaguely remember the commercials shown on British TV for the military (or at least the Territorial Army). Joining up was made to look like a bit of an adventure, which mostly seemed to involve lots of sneaking about at night with a blackened face and a big gun. And if that didn’t tempt you, you could apparently learn new skills, solve life-threatening problems, and enjoy the comradery of your fellow soldiers.

The Japanese Marine Self Defense Force however seems to be taking a rather different approach. There’s certainly no roaming around in the dark in its new commercial. Not a gun to be seen either, as the closing line is We love Japan. We love peace. And it has to be said, the comradery on offer seems to be of a slightly different variety.

Click on the picture to see the commercial in all its glory, but be warned that it can take a bit of a while to appear. It’s worth it though. 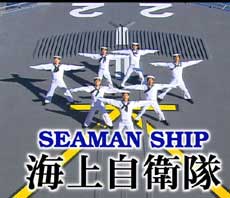 Where’s the biker and the construction worker?