The National Police Agency (NPA) recently reported that the number of traffic accidents involving electric wheel chairs was a staggering 231 from January to November last year. An increase of 50 on the previous year.

The NPA gave no information about the cause of the accidents, but rumour has it that many old men (and the occasional old lady) have been spotted racing in the early hours of the morning. It seems that these retired rebels are making the most of the quiet roads; staging races, speed trials, and stunt competitions. There is even talk of large amounts of cash changing hands. Some participants allegedly gambling their weekly pension on a particular race or driver.

But with fading eyesight, and decidedly slow reactions, it’s no wonder the number of accidents is on the rise. With no real protection except slippers, and a warm blanket thrown over their legs, it’s surprising that the death toll isn’t higher. Yet having said that, the number of fatal accidents has risen from 10 to 15. Unless something is done, and soon, it would appear that these figures can only get worse.

It has to be said that there is another theory regarding this large increase in electric wheelchair accidents. Namely that a rise in both traffic congestion and motorized wheelchairs has led to an inevitable escalation in the number of incidents. But frankly I find this argument too far fetched to even consider. 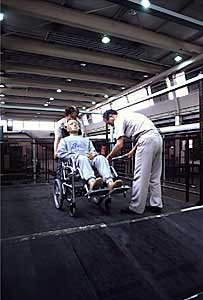 Engineers working on the aerodynamics