Earlier this year, Tetsuji Shibuya was sentenced to 5 Â½ years in prison for stealing Peko-chan dolls; and in a decision that further underlines the gravity of such a crime, his accomplice, Hiroyuki Cho, was sentenced to an even heftier 7 years behind bars this week. 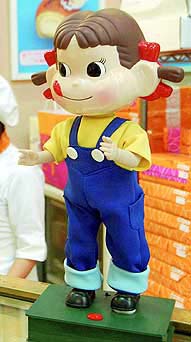 As you can see from the picture, Peko-chan dolls aren’t the most attractive of figurines, but the mascot of Fujiya cakes and sweets — which made its first appearance 45 years ago — has become something of a collectors item, especially as the promotional dolls are not for sale. Creating a situation where they are stolen and then sold illicitly over the internet and at flea markets. The life-size versions that are placed outside shops sometimes selling for as much as 100,000 yen (500 pound) a piece. 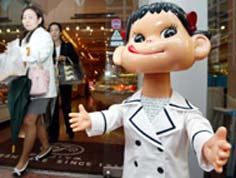 It is said that the Peko pair managed to steal around 15 life-size versions of the doll, making a relatively impressive 1.1 million yen (5,500 pound). This unprecedented number of thefts — of which some included violence — prompted prosecutors to demand an 11-year prison sentence for Cho, as he was considered the mastermind behind the Peko pilfering plan. Judge Takeshi Kaneko agreed, adding that Cho-san had shown no signs of repentance, despite being the brains behind the operation. The unemployed 39-year-old found guilty of emailing instructions to his sidekick Shibuya.

An alleged copy of one of the incriminating electronic messages is shown below, after apparently being leaked by the prosecution. The email outlining the planning and intelligence needed for such a delicate operation.

A document that was inexplicably written in English. 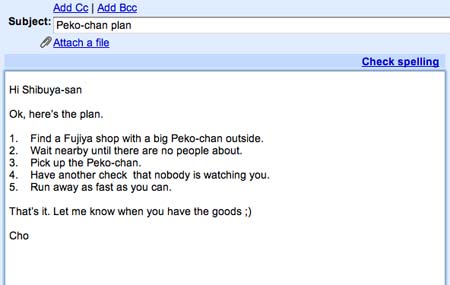