â€œWe are strongly pushing for the iPod tax.â€

Taizo Shinya, spokesman for the Recording Industry Association of Japan, which supports a copyright law revision to charge royalties on digital music players.

Not content with already fleecing music buyers with ludicrously high prices, Japanese recording companies are now after even more easy money. This time from anybody who has the temerity to buy a digital music player. The appropriately named ‘iPod tax’ being touted as somewhere between 2 and 5 percent of a portable player’s retail price.

Now admittedly the illegal downloading of music is still rife, but when you look at the prices of CDs in Japan, it’s hardly surprising. Take this early release from singing sensation Ayumi Hamasaki. 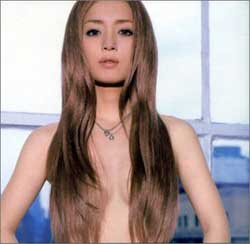 Nice cover and all that, but LOVEppears retails at a staggering 3,392 yen (almost 17 pound). A figure that could — generously, looking at many other CDs — be described as an averagely priced album. And when you consider that Apple’s iTunes Music Store is already a success in Japan — recently racking up a whopping 1 million sales in its first four days — the record industry’s greed appears to know no bounds. Or feel any shame for that matter.