Going to a sporting event in Japan can sometimes be a little disappointing. As despite a wealth of talent on display, and healthy crowds to support them, there can be a certain lack of atmosphere. Although that’s not to say that the fans necessarily lack passion, as if the enthusiasm wasn’t there, why would people go to the trouble of buying a ticket and traveling to a game/event in the first place?

But despite this genuine interest, what’s often missing is supporter spontaneity. There are chants and songs, plus a multitude of hand gestures, yet they are strangely regimented. Even the deranged and nonsense spouting fans that are common in most stadiums around the world are inexplicably absent.

But now and again somebody arrives on the scene with the power to change all this. Sumo star Takamisakari may not be the best wrestler in the world, but his pre-bout chest beating and comical demeanor produce a degree of unrestraint rarely seen on these shores.

The joy and excitement he manages to generate is clear in this photograph taken by my friend-with-a-very-nice-camera Mr. Brett Cannon. 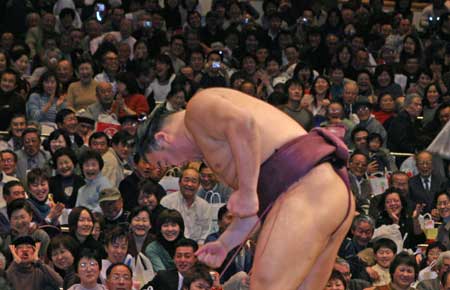 And if you look in the bottom left hand corner, there’s even a deranged and nonsense spouting fan. Salary man Suzuki miraculously transformed into a hollering and happy idiot. Exactly what live sport is all about.