It’s sumo time once again, with the current tournament being held in Nagoya. And to celebrate 15 days of televised action, here is a picture I took in Tokyo a few years ago.

Before the wrestlers do their stuff, they enter the arena and show themselves off on the dohyo. Yet perhaps the most surprising aspect of this ritual is when all the wrestlers very daintily lift up their kesho-mawashi (the ceremonial aprons they are wearing in the picture).

To see these big and imposing men performing such a feminine looking act is fascinating to say the least. And whilst it’s a word not often associated with sumo, perhaps the best way to describe it is cute.

Which is very dissimilar to the decidedly un-cute, but supremely talented yokozuna, Asashoryu. 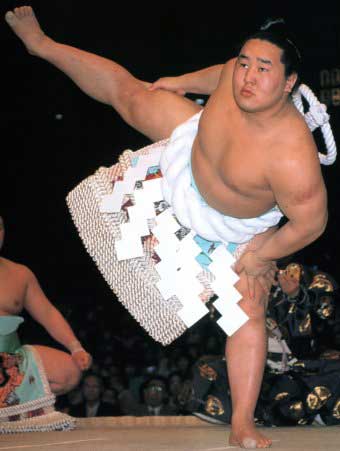