Bored with your iPod, Sony PSP, and email equipped mobile phone? Well fear not, Japanese medical technology company Scalar has produced some video sunglasses. And as an added bonus they aren’t especially unfashionable either. 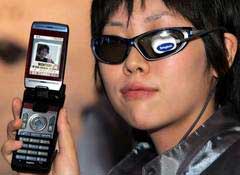 Appropriately named Teleglass, the sunglasses can be connected to a portable DVD player, digital camera, and perhaps most importantly with 3G handsets becoming commonplace, a mobile phone.

Using a combination of technology, including the magnifiers utilised by dentists and the hands-free displays used by helicopter pilots, a picture is projected onto the left lens of the glasses. With the manufacturer claiming it’s like watching a 14-inch television from about a metre away. And with the right eye free, the wearer will still be aware of his or her surroundings.

When the product goes on sale, its rumoured price is somewhere around the 50,000 yen (250 pound) mark. And with an early batch of the Teleglass selling out almost immediately from the company’s website, it looks like sunglasses will be the fashion accessory for gadget loving commuters this summer.

However personally I think I’ll still stick with my trusty newspaper for now.