The Xbox 360 may be the current king in Europe and North America, but in Japan, Microsoft’s supposed Sony silencer is floundering — badly. With lackluster sales right from the start, the next-generation nonstarter is arguably dead and buried already; paltry sales of just over 1,000 units in the 3rd week of June amply proving this, especially when compared to the 25,467 PlayStation 2s shifted over the same period.

That said, when it comes to promotional events, Microsoft can still attract a good crowd — in particular when scantily clad models are involved. Pin-up queens Natsuki Yoshihara (right) and Haruka managing to wow avid gamers over the weekend with their prowess at the wartime epic ‘Call of Duty 2’. 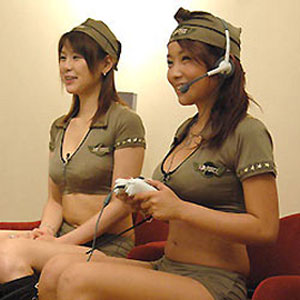 Decked out in casual gaming attire, the two young ladies impressed the surprisingly all-male gathering with their joystick mastery and — with the addition of a few excited squeals — how quickly they managed to get their characters to release their load.

Young Yoshihara-san later claimed that the game’s voice-chatting feature had gripped her attention. The audience however confessed to being gripped by matters a little closer to hand.