Police in Osaka have launched a manhunt for a knife wielding trouser thief. Now whilst stealing trousers may not seem like the worst crime in the world, it’s a little worrying when they are taken from someone who happened to be wearing them at the time.

Last Tuesday night, an unsuspecting 18-year-old cook was leaving a public toilet when he was confronted by the thief. At knife point the young man was forced to remove his trousers (which also contained a mobile phone and 10,000 yen [50 pounds] in cash), and give them to the armed criminal. After being handed the trousers, the plunderer, who was described as about 30, fled the scene clutching his ill-gotten leg wear.

Unfortunately this left the victim trouserless in a city centre public toilet. Not an ideal situation to say the least. After hiding out in the restroom for a while, the cook eventually mustered up the courage to venture out and rushed to a nearby store where he somehow managed to borrow a pair of trousers. Unfortunately the report didn’t give any details about how he explained his predicament, but one can only imagine how embarrassing the whole situation must have been. 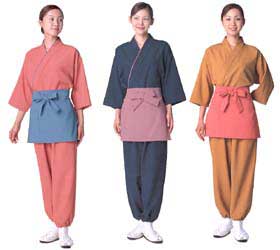 Some cooks with trousers yesterday