It would appear that the police in Wakaba-ku, Chiba prefecture, aren’t exactly run off their feet, as after being on the look out for an air releasing tire terror, they have finally got their man.

After around 100 complaints in the last six months from distraught bicycle owners, plus an official report from a neighbourhood association, an unnamed 79-year-old man is now safely behind bars. Well, he’s been arrested anyway — on the laughable charge of ‘wilful destruction of property’. Accused of damaging the valve on one of the tires he let down before his eventual capture on Sunday. 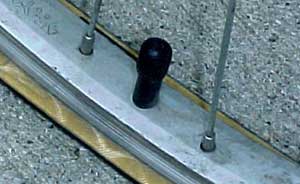 The compressed air criminal has since admitted to the allegations, claiming he did it for a bit of attention. Glumly saying, â€œNobody will give me any time and I was feeling lonely.â€

Rumours that the Wakaba police are now hot on the heels of a local litter lout have yet to be confirmed. Although forensic experts are said to be examining several discarded cola cans for evidence.