A matter of days after Sony’s Qrio conducted the Tokyo Philharmonic Orchestra, Toyota has gone and topped it with their new robot band. 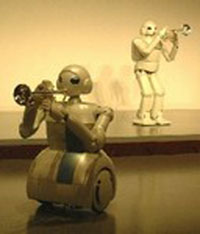 This isn’t some kind of stunt, the little fellas are really playing those trumpets. They have artificial lungs allowing them to produce the necessary air, and also lips to form the notes. The robots apparently wowed the crowd with a rousing rendition of When You Wish Upon a Star.

When the performance was over, the robots bowed and waved to the audience. No doubt thinking to themselves that it will only be a matter of time before it is the humans who are bowing to them, their robotic (and trumpet playing) masters.