A while ago on this site I reported a 17 hour police hunt involving 18 cars and two helicopters. All for a man alleged to have stolen a DVD player.

But that epic pursuit has been made to look like kids stuff by a chase through Tokyo’s suburbs on Tuesday. An operation that involved an unprecedented 92 police vehicles and 2 helicopters. Whilst the man the police were after was admittedly suspected of stealing more than a DVD player, he can hardly be described as public enemy #1. And whether the theft of a woman’s bag and a small van warrants an operation on this scale is highly debatable to say the least. But by snatching the bag and then making off in a stolen van, 33-year-old Masami Takahashi set in motion events that would even be considered excessive in a Hollywood action movie.

This epic chase went on for several hours, and it took Takahashi-san and heaven knows how many police officers through a whistle stop tour of 5 Tokyo municipalities. In the end though, and no doubt through sheer force of numbers, the suspect and his vehicle were brought to a halt.

But even then the gallant criminal wasn’t ready to give up, as he attempted to escape on foot. But with the streets presumably swarming with police, and helicopters hovering above, Takahashi didn’t get very far. Eventually being captured in a barbershop of all places. Although whether he’d had time to get his haircut before being arrested wasn’t reported. 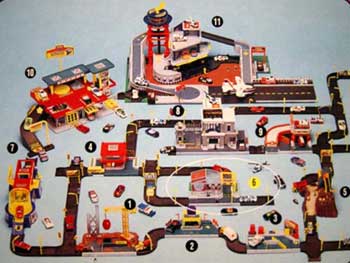 Pictured above is an alleged reconstruction of the police chase. The circled area is where Takahashi was finally arrested, and the numbers apparently indicate when and where more police vehicles were requested.