Japan and China’s ongoing dispute over the Senkaku/Diaoyu Islands has strained relations between the two nations enormously, although potentially just as damaging to Japan is the political shift to the right it might cause — particularly so as the country and its politicians are generally very conservative to begin with. The hawkish Shinzo Abe is back fronting the Liberal Democratic Party, and along with the capital’s unrepentantly racist governor, Shintaro Ishihara, they are wilfully goading their neighbours. The former once again visited Tokyo’s controversial Yasukuni Shrine, and the latter, not content with starting the whole island controversy in the first place, is now attempting to make matters worse by proposing building on the rocky outposts.

Such fears of a rightward shift aren’t exactly dispelled by the individual below either. A man who, along with his Rising Sun flag, was carrying a sign that in no uncertain terms said Chinese and Koreans should get out of Japan.

Yet at the same time there is hope — at least in regards the Japanese public, if not their politicians — as he was very much alone, and reassuringly the only responses he got were confused or openly critical stares. 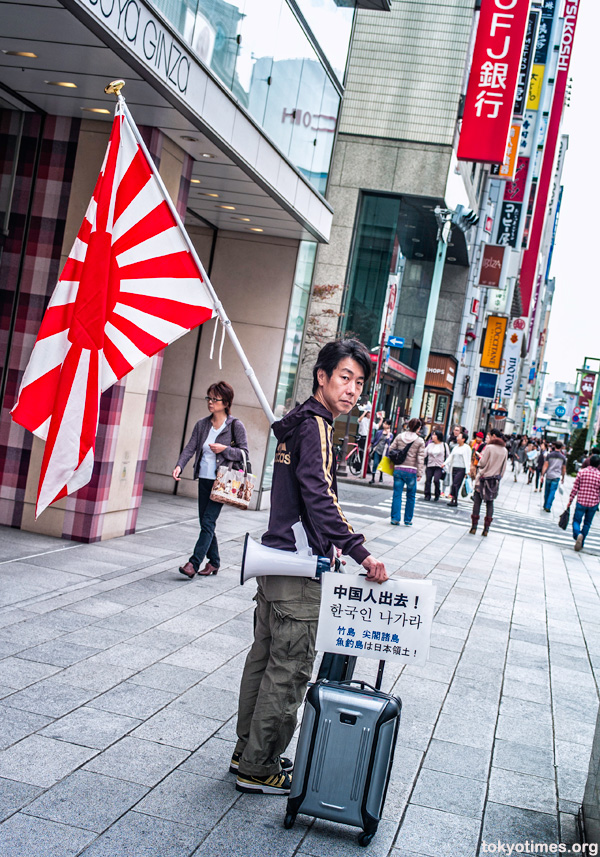