Japan’s wavy haired Prime Minister obviously felt no shame yesterday in having his picture taken with the nation’s favourite baseballing son, Hideki Matsui. No doubt Koizumi is hoping that some of Matsui’s immense popularity will rub off on him. 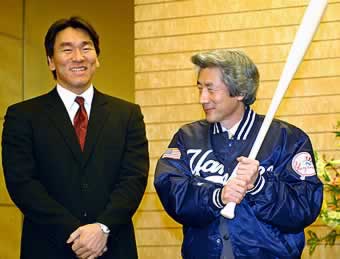 But does he really believe that donning a Yankees jacket and smiling at the camera will cause the whole nation to forget that Japanese troops are now stationed in Iraq? Or that people simply won’t see through this transparent stunt?

Having said that, his rumoured game of naked tennis with Anna Kournikova tomorrow could be an altogether different story.