The gaming world may well be bracing itself for an upcoming console war, and the likes of Apple and Sony continue to do battle over hard disk music players. Yet neither of these can compare to the thrilling ball point battles waged by Japan’s pen producers.

In the keenly contested and prestigious we’ve-got-the-smallest-ball-point-pen-on-the-market competition, stationery giant Mitsubishi recently dealt its competitors a hefty blow by releasing a 0.18 mm pen on to a writing implement obsessed market. A product that makes main rival Pilot’s 0.25 mm offering seem ludicrously large. Prompting the company — understandably buoyed by its new creation and ownership of the ‘smallest ball point pen manufacturer in the world’ title — to gloat by imaginatively writing rice on, erm, a piece of rice. 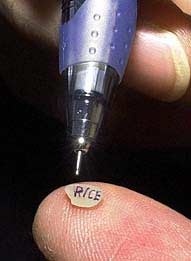 This fiercely competitive market it seems is fuelled by schoolgirls and their penchant for writing miniscule kanji in diaries, letters, and day planners. With pen manufacturers laughing with glee and greedily rubbing their hands together due to the recent trend in using different colours to express various moods and feelings. One company official happily claiming, â€œSome girls will even use more than ten colours in one letter.â€

The introduction of the 0.18 mm pen however could well be the end of a long and fascinating journey, with many pen professionals reluctantly saying that such stationery technology has probably reached its limit. Not that such talk can dampen the spirits of the nation’s ball point buyers; a shop assistant at Shibuya’s Tokyu Hands store claiming, “Avid users of stationery goods are keenly watching for product releases. They buy and try out new stuff out of curiosity.â€

A passion that makes my love of gadgetry seem almost healthy. Emphasis very much on almost.