Despite several efforts — albeit of the half-hearted variety — baseball’s appeal totally escapes me. Especially when compared to football (soccer). That said, my favourite sport could learn a thing or two from the bat and ball game. Not as far as any sporting action is concerned mind you, but on the merchandising front. Namely the production of ladies undergarments.

Earlier this year, the Rakuten Eagles produced an attractive baseball related bra and panties combo, and not to be outdone, the Hanshin Tigers — in conjunction with Triumph International — have produced a similar set to commemorate the team’s 70th anniversary. 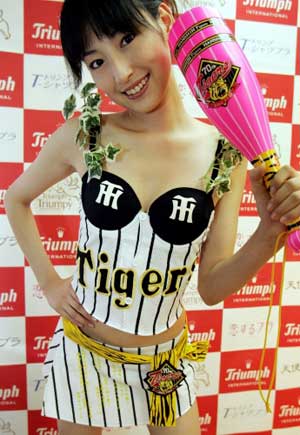 Not that anybody is interested, but in a vain attempt to justify the posting of such a picture, I should rather tediously add that the bra is embroidered with the Tiger’s logo, and with the skirt and a pair of shorts will go on sale for 21,000 yen (105 pounds).