A man was arrested in Osaka on Monday for trying to sell a giant panda on an internet auction site. But before you gasp in horror at 45-year-old Noburo Ichii’s dirty deed, it should be mentioned that the animal was stuffed. Does that make it alright?

Yet whether you believe it’s acceptable or not is in some ways irrelevant, as selling stuffed giant panda’s is apparently a violation of Japan’s species protection law. And along with Ichii-san, 72-year-old Yasunori Ueda was also arrested, for originally selling the panda to the unsuccessful animal auctioneer in the first place.

Stuffed Panda’s though are obviously a decent money spinner, as the 1.1 metre tall animal had a starting price of 8 million yen (40,000 pounds). This high valuation was perhaps also helped by Mr.Ichii trumpeting that it was “sent from China as a testimony to Sino-Japanese friendship.”

Where the panda did actually come from is still being investigated, and Ueda isn’t giving much away. Only saying, “I got it from a friend 20 years ago.” 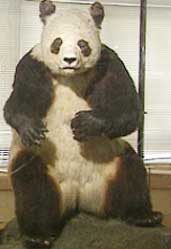 I wonder if he was offering free shipping…