Underwear maker Triumph International has never shied away from cashing in on social or sporting affairs, producing goods marking the creation of a new baseball team, Japan’s energy saving ‘Warm Biz’ campaign and even the issue of postal privatisation. Now however it’s the more penetrating problem of the nation’s overall well-being. 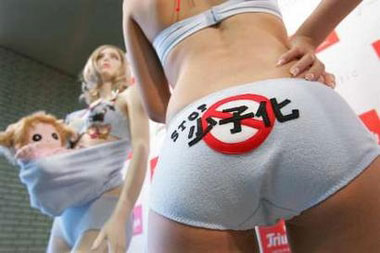 Yet what may initially appear as a garment designed to rebuff possible rear-guard reconnaissance missions, is actually — and quite literally —about more productive forms of activity, namely halting the country’s falling birth rate; Triumph’s pioneering panties reading, ‘stop the birth rate decline’.

A drive that whilst hopefully successful, will not produce too many youngsters like the one pictured above.