Apparent regulations that require at least one hairdressing shop on every single street in Tokyo, could now be on the verge of collapsing; after a disgruntled customer successfully sued her stylist for a supposedly horrible haircut.

The plaintiff was a 27-year-old cabaret club hostess, and despite only receiving 240,000 yen (1,160 pound) — following a 6 million yen compensation claim — the ruling could set a worrying precedent for the nation’s hordes of hairdressers.

Presiding Judge, Yuki Mizuno, explained the court’s decision by saying, “Hairstyles are a major influence on appearance. A hairstyle is a selling point for a cabaret club hostess and there was a period when her self-confidence was affected when she waited on customers.â€

The woman’s claim it seems was based on the issue of her haircut being shorter than she requested — and also the wrong colour. This allegedly leaked photo proving that the young woman may have been justified in her actions. 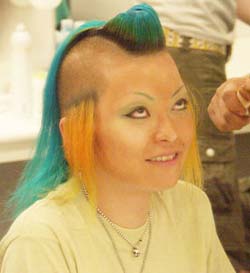