The picture below shows Shinobu Ikehata showing off an item from Triumph International’s new fall and winter collection. The bra Ms. Ikehata is sporting depicts the racehorse Haruurara, famous for its record breaking run of races without a win. 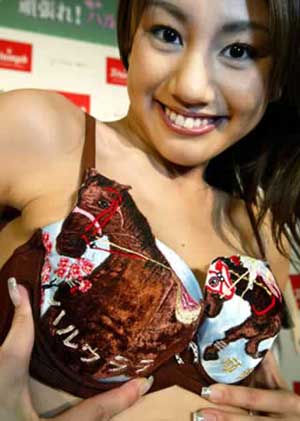 Triumph International claim to be using the image of Haruurara because the animal is a symbol of determination. Now call me cynical, but alternatively it might just have something to do with the fact that the horse is now something of a celebrity, and anything Haruurara related sells by the bucket load.

Although the company’s actions are perhaps no less cynical than mine. Padding out this worthless story just to merit the picture of a pretty young woman wearing a bra.

*I should say that I am aware that horses don’t bray, but I couldn’t think of another word to go with bra. And in horse racing circles, I’m sure the poor performances of Haruurara would lumber the horse with the derogatory moniker of donkey. Probably.