The seemingly perpetually pregnant Britney Spears has caused something of a kerfuffle in Japan, a promotional campaign featuring her bare body being censored by Tokyo Metro Co., the capital’s subway operator. 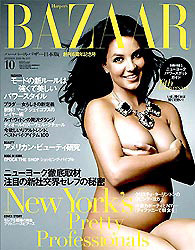 Whilst Britney’s ballooning breasts and bulging belly were deemed acceptable, her thunderous thighs were not, resulting in the ad campaign designed for Omotesando Subway Station looking like this.

HB Japan Inc., the publisher of the magazine being advertised, failed to understand the decision, saying, “The photo expresses her happiness at being pregnant. Covering part of the photo has made its concept unclear.” Tokyo Metro however remained unrepentant, claiming the image of the singer violated advertisement guidelines, which state that they must be appropriate in view of the protection of youths.

However the hypocrisy of the decision will not be lost on HB Japan, especially considering that as of writing, this ‘protection of youths’ hasn’t stretched to removing Ms Spears’ songs from the nation’s airwaves, with the likes of â€œOops!…I Did It Againâ€ and â€œBaby One More Timeâ€ still allowed to pervade the minds of impressionable youngsters.