With husbands doing next to nothing around the house, and making even less effort in the bedroom, things aren’t looking especially rosy in the relationship realm. But whilst this may paint a decidedly grim picture of marriage in Japan, and an even worse one of the nation’s menfolk, it’s not all doom and gloom — at least not if you visit the village of Tsumagoi in Gunma Prefecture; a spot where a 4th Century emperor is said to have unashamedly sobbed following the death of his wife who had sacrificed her life for his worthy well-being.

Whilst now more famous for its cabbages than monarchial mourning, the name of the village translates as ‘wife love’, making it the perfect spot for members of the Nihon Aisaika Kyokai — or the Japan Wife Lovers Association. As come September 9th, the gang of mostly middle-aged men will stand amongst the cabbages of Tsumagoi and shout about the love they feel for their wives. 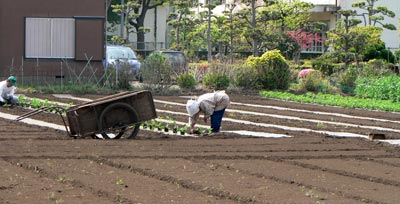 Chief shouter and head of the group, Kiyotaka Yamada, explained his shameless bouts of bawling by saying, â€œI just wanted to tell as many people as possible about what a wonderful marriage I was enjoying. I wanted to be able to give courage to men who want to thank their wives but are too embarrassed to do so.” A laudable theme it has to be said, and one he wants to develop beyond the confines of his organisation by the introduction of ‘Love Your Wife Day’ on January 31st — a bold (and some would say overly ambitious) venture that urges salary men the length and breadth of the country to briefly cast off the shackles of their company. “We want people to go home from work early on that day at least and say ‘Thank you’ to their wives.”

Yamada-san hopes that these initially small steps will eventually lead to not only better relations, but also a better image of Japan throughout the rest of the world. “Overseas, Japan tends to be seen as a chauvinistic country. We want to improve the image of Japanese men overall by carrying out public displays of affection for our wives. For Baby Boomers such as myself, saying that you love your wife is akin to admitting that you’re totally hen-pecked. But, I’d really like to see as many guys as possible head up here on September 9th and shout their lungs out no matter how much of a fool they feel.”

Turn-out is expected to be low.