In Osakikamijima, Hiroshima, an old man suffered a dislocated shoulder when his house was destroyed by an out of control cargo ship.

Masuo Hamada, the captain of the Shintsunetoyo-maru, admitted to falling asleep in the early hours of Saturday morning as he was guiding the ship to Tokuyama Port in Yamaguchi Prefecture. Coast guard officials were said to be questioning Mr. Hamada (providing he can keep his eyes open that is), and it’s thought he will face charges.

Fortunately, 76-year-old Haruo Abe’s dislocated shoulder was the only injury suffered by those affected. Although Abe-san’s house (and 2 neigbouring one’s) didn’t fare quite so well. 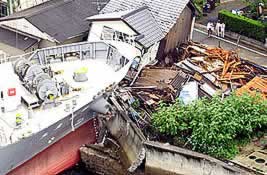