Despite a crazed feline biting off the toes of an elderly woman, the animal protection centre where the captured beast was being held received over 160 calls from cat lovers, pleading that the toe loving tabby’s life be spared.

Yet even with such a history, officials at the centre initially allowed the animal to play with visitors whilst a decision was being made. However perhaps not surprisingly, they quickly noticed that the cat was untamed; although whether this had anything to do with the animal looking menacingly at guests’ fingers or toes wasn’t disclosed.

Based on these findings, the protection centre decided to wash its hands of the feline and give it a new home. An official saying, “The general public was worried about the future of the cat. Considering the opinions of those who did not want the cat put down, we decided to give it to an animal lover.” 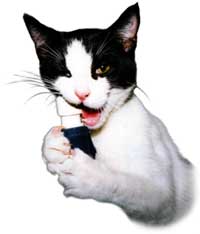 Rather them than me.