Vending machines are genuinely ubiquitous in Japan, so it’s very rare for me to make one of them the main focus of a photograph. That said, there are exceptions, and this previously posted set of old and defunct drink and tobacco dispensers was something I thoroughly enjoyed putting together.

Similarly enjoyable was both finding and getting some food from the decidedly old school toast vending machine below. One of only a few still in use, there was a choice of either a pizza or ham toasted sandwich.

When it popped out of the contraption, the pizza option I went for was plenty warm enough and tasted surprisingly good. Admittedly it was somewhat on the soggy side, but it was toast, from a vending machine, so that didn’t matter one little bit.

And if a toast vending machine wasn’t enough, there was a similarly retro feel to the pitstop’s car park, as it had an area set aside for youngsters to play and enjoy cigarette breaks between rides. 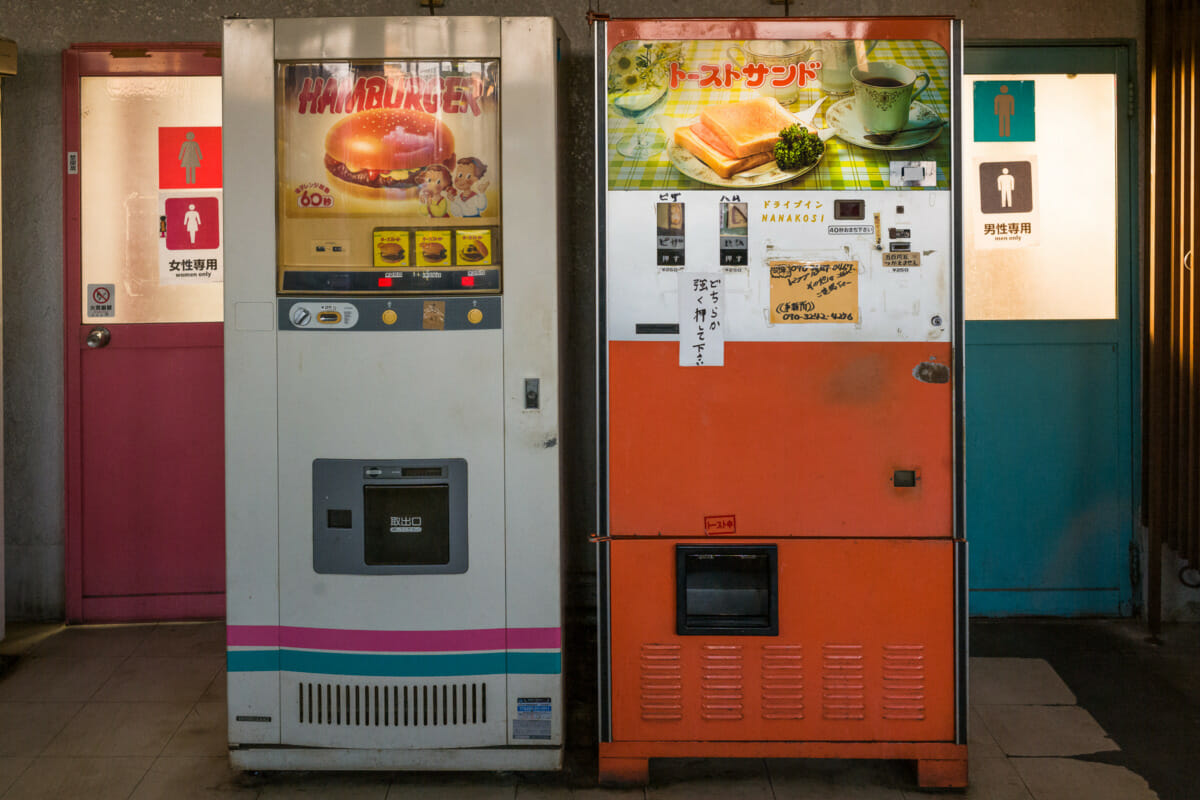 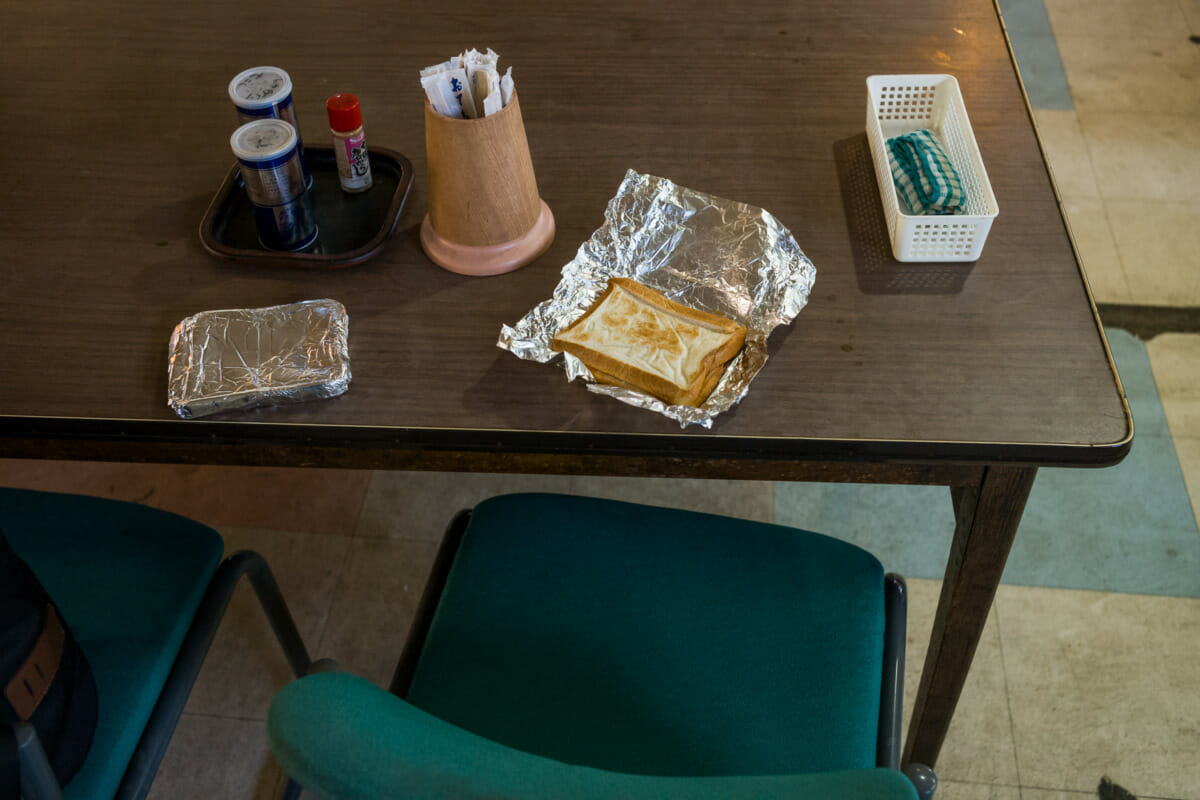 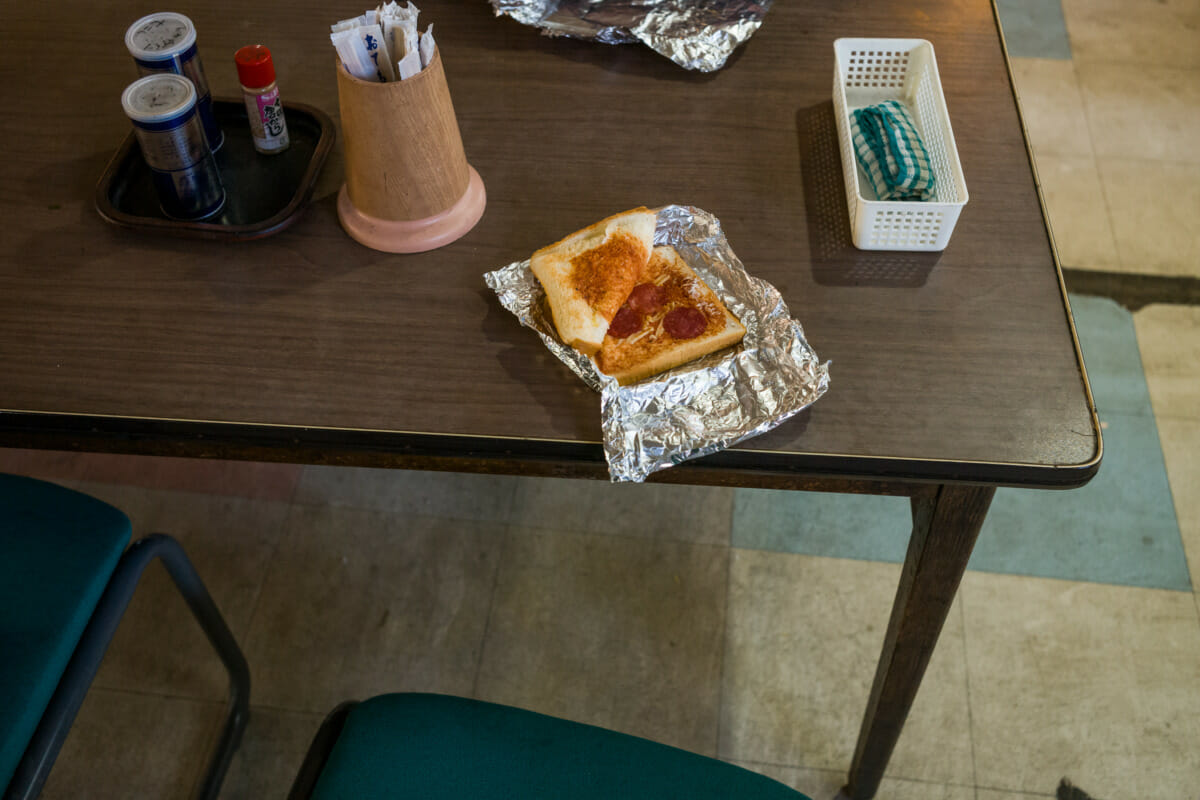 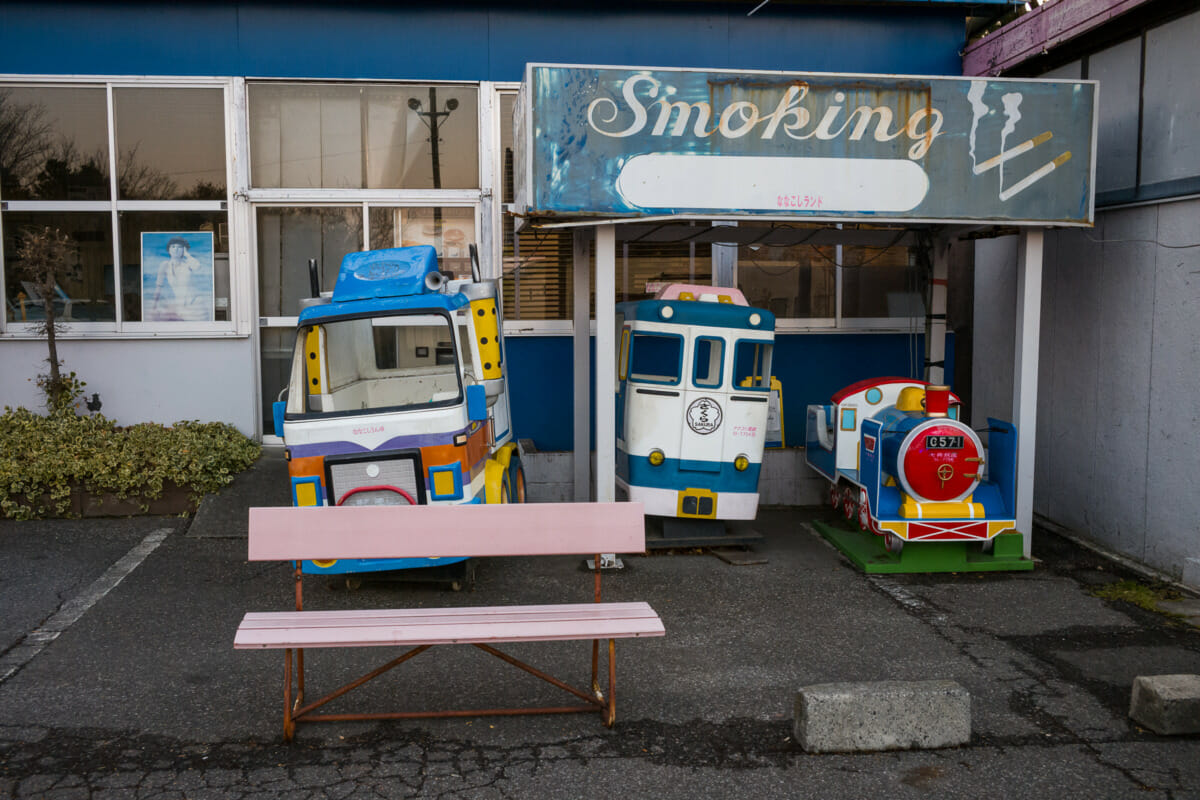 Old and faded shop fronts are almost always interesting, with the colours, signs and slow decay suggestive of the years that have passed and the stories held within. Usually a simple straight on shot — just like this other retro booze shop — is enough for me to document it and have a keepsake before its likely demolition, but something about this one demanded more. It’s not that special really, and yet the shutters, along with the broken vending machine did seem to require several extra photos. A decision that also provided the perfect opportunity to get a person in the frame which is always worth the effort. 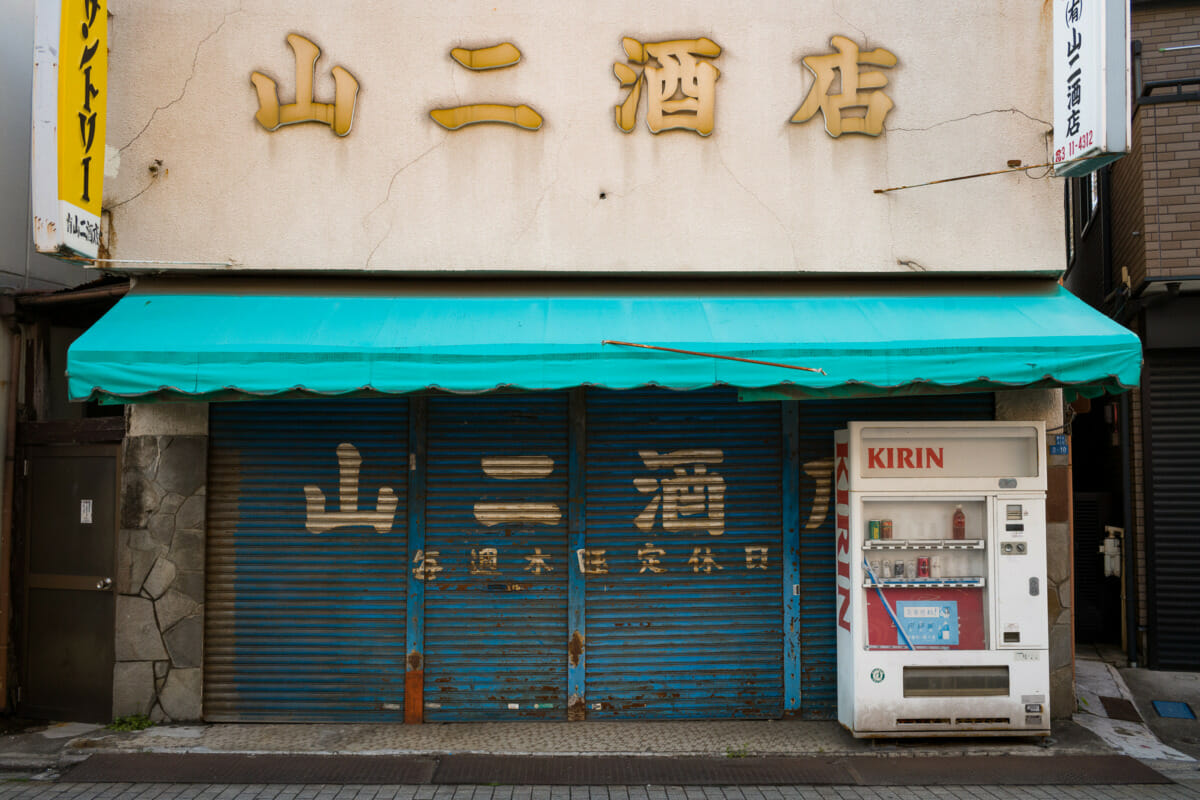 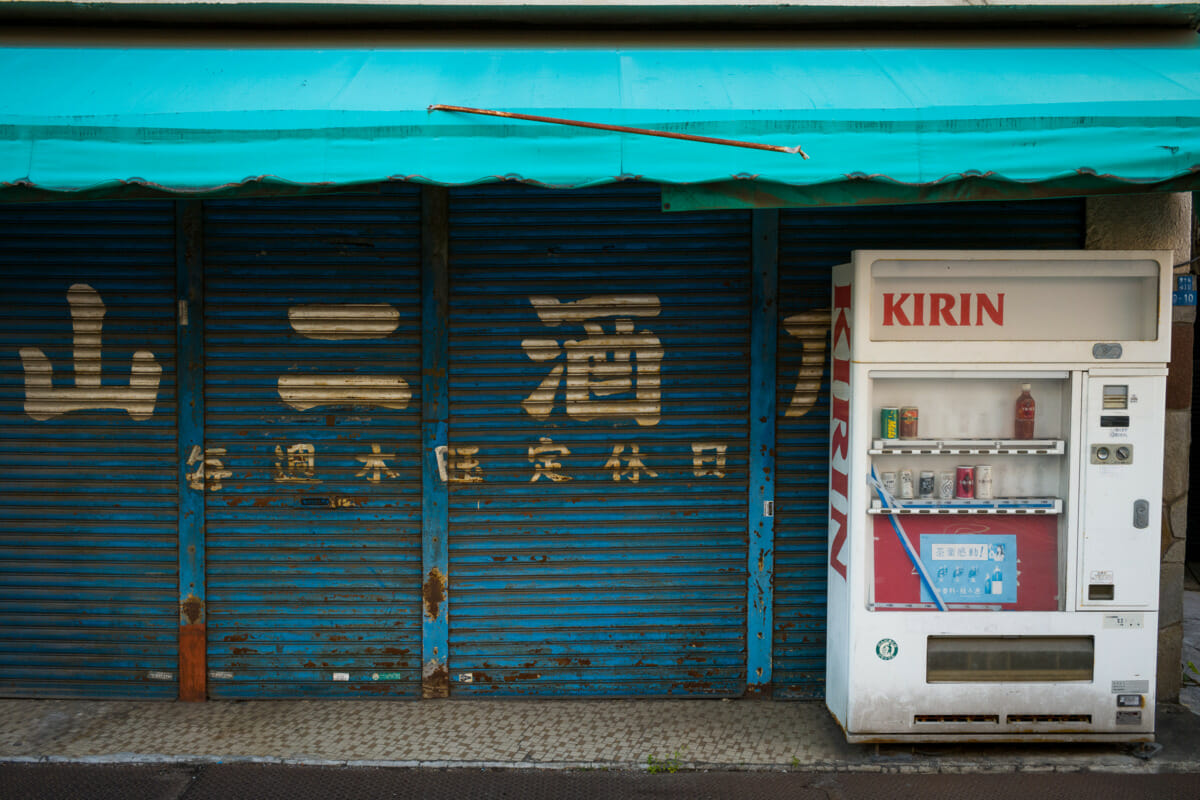 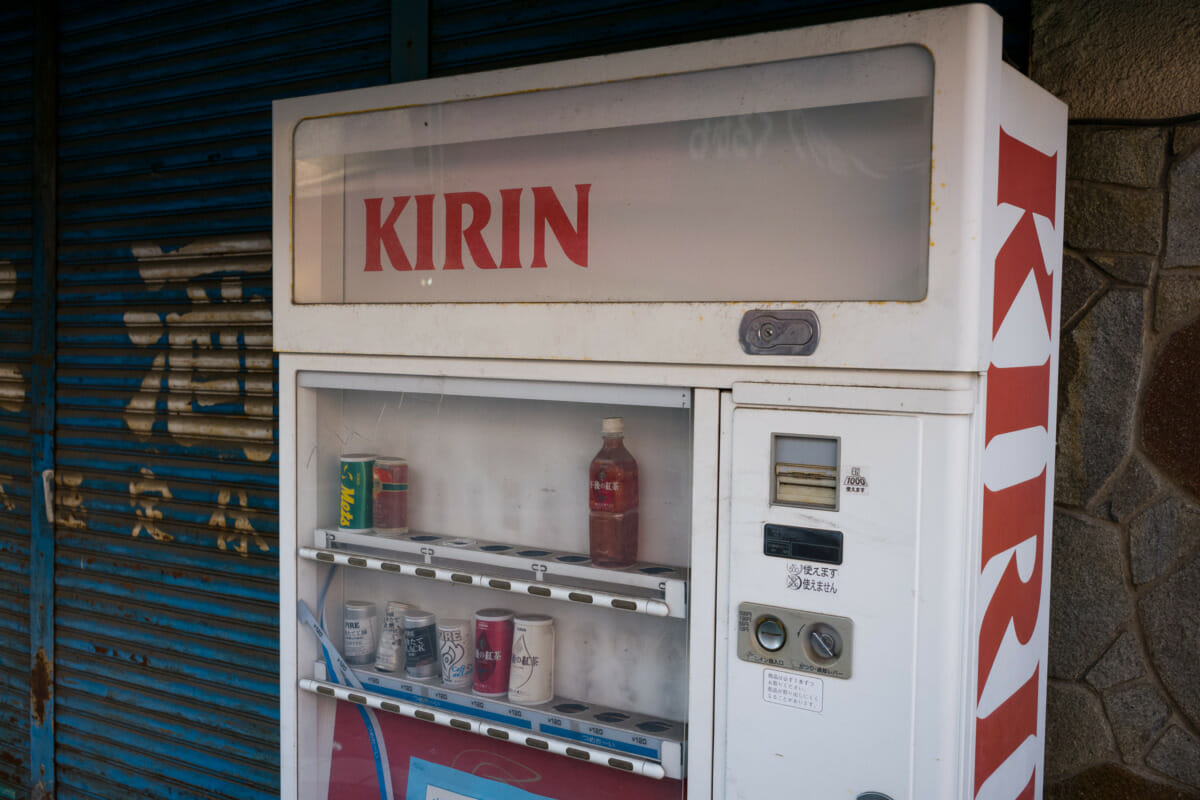 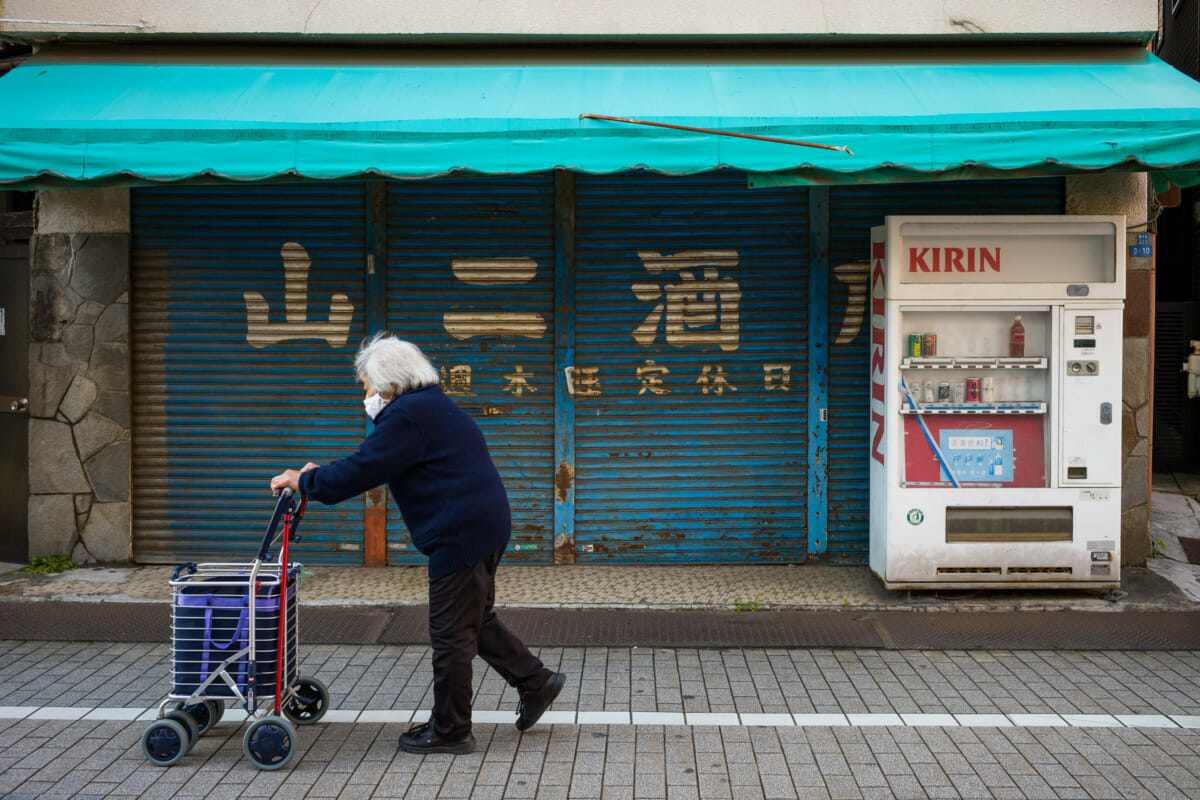 When sliding open the door to enter a little Tokyo bar, there’s often no way of knowing what the interior will be like. One can make some educated guesses of course, but the outside isn’t always a good indicator of what’s on the inside. Sometimes that results in disappointment, but sometimes it’s quite the opposite, and the tiny establishment below most definitely fell into the latter category.

The grubby windows meant seeing in wasn’t possible, and even getting in wasn’t easy due to the door being so old and twisted, but once seated, the stained walls and glass made for a sight to behold and then some. A bar that’s as small as it is interesting, and without a doubt the perfect place to sit, relax and take in all the intriguing little details. 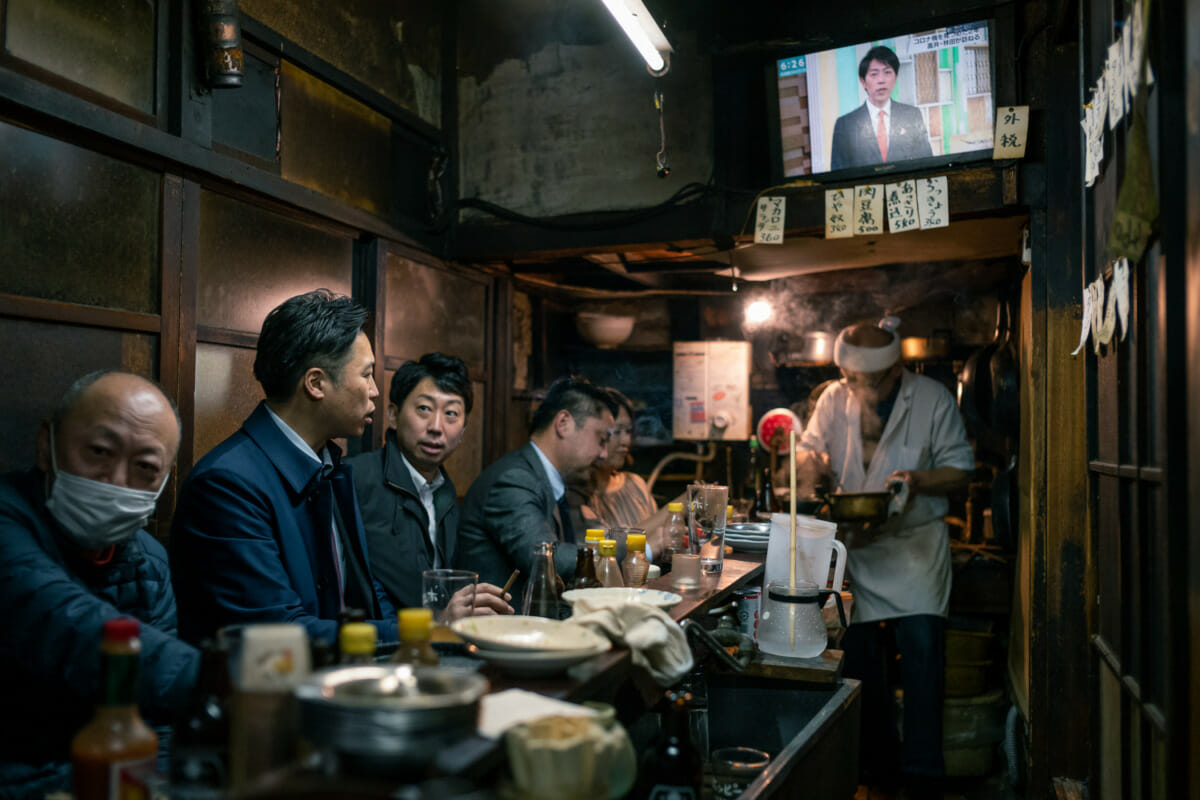 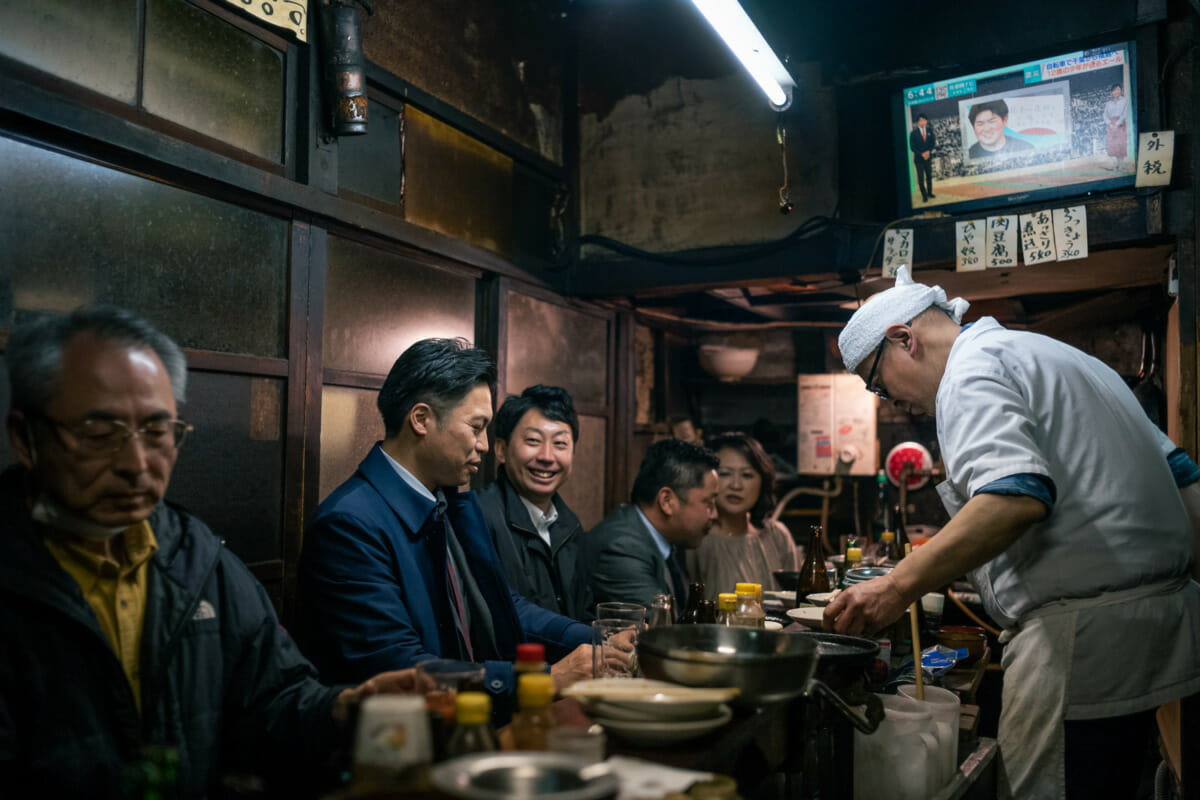 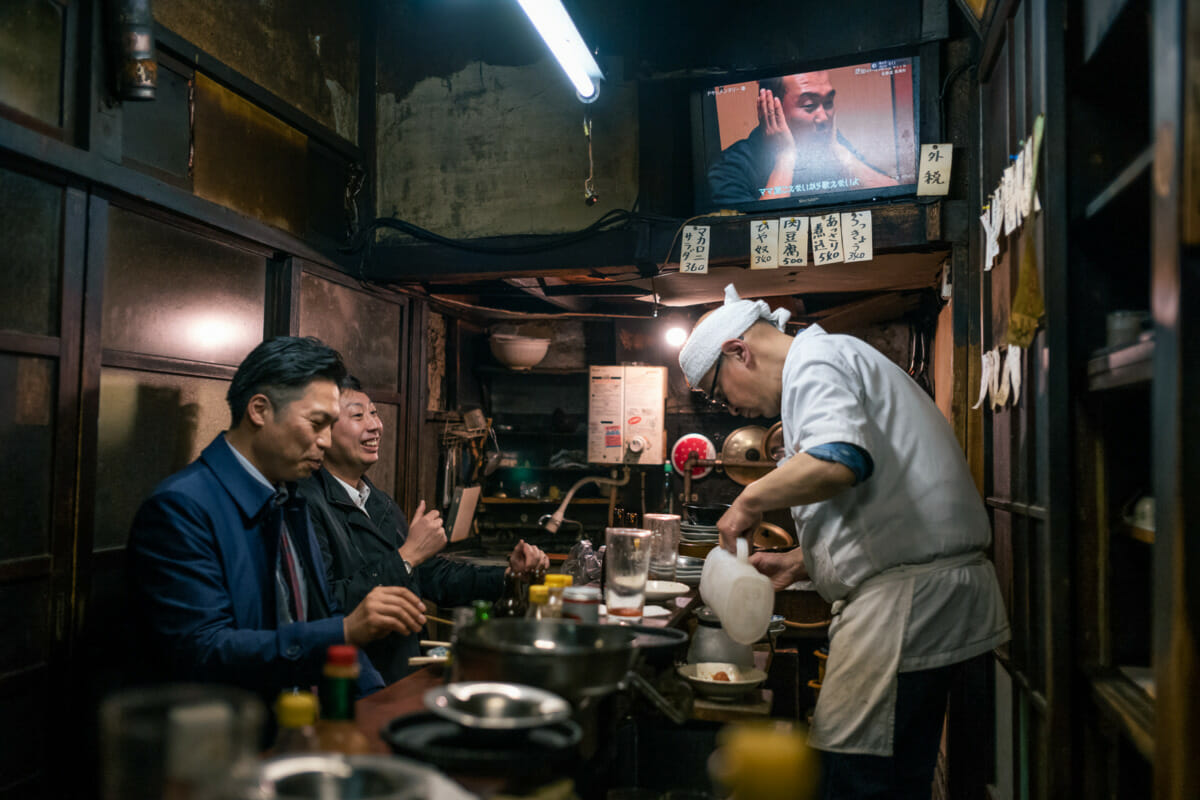 These previously posted sights and sounds from a Japanese drinking alleyway were taken in a place that is as unique as it is atmospheric. Unfortunately the little spot below can’t match that anymore, as even at night it’s a lot quieter than it used to be. Half of it has been demolished, and a good number of the remaining bars are no longer in operation. The Drinkers’ Alley sign at the entrance, on the other hand, still looks as incredible as ever, and its rather precarious appearance is only added to by the cluttered and suitably shabby surroundings. 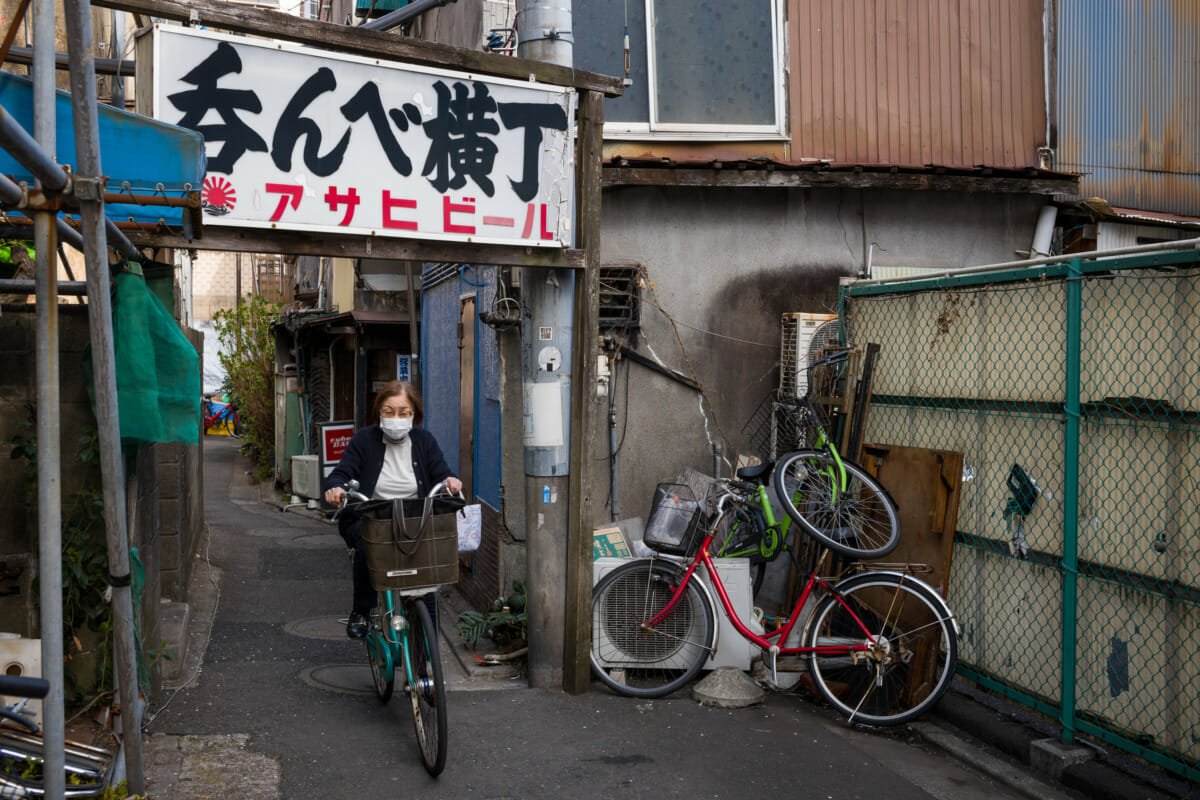 Towards the end of last year I posted the same exterior photo, offering a glimpse inside this little yakitori place. At that time it was our second visit, and also the second, increasingly frustrating occasion to be denied entry. Such small bars are great in so many ways, but their limited space does mean that securing an empty seat isn’t always the easiest. Timing is very much of the essence, and on both evenings we’d clearly been way off.

Thankfully the third time was indeed the lucky one, and as expected it didn’t disappoint. The mama-san has been quietly holding fort there for over three decades, while the bar itself has been in business for about half a century. A further fifty years is obviously out of the question, but with the owner still positively youthful compared to many of her peers, it’s likely that everything will remain pretty much the same for many more evenings to come. 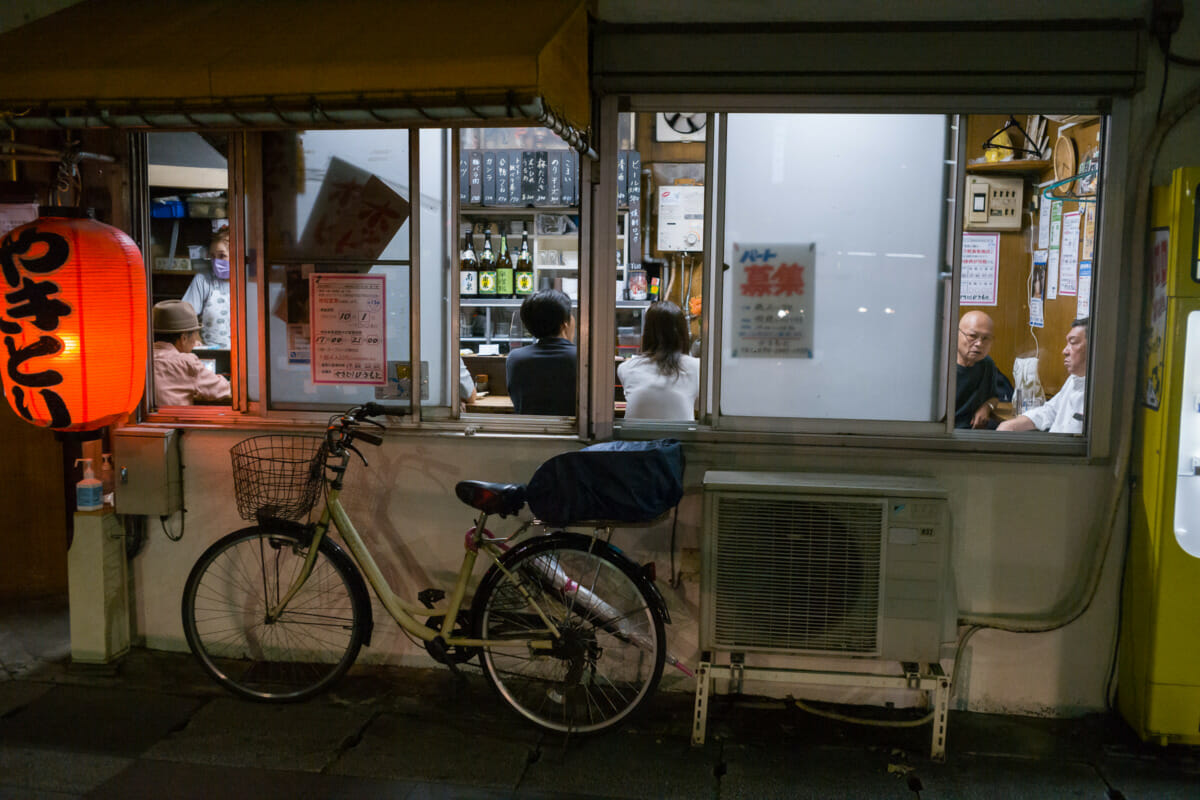 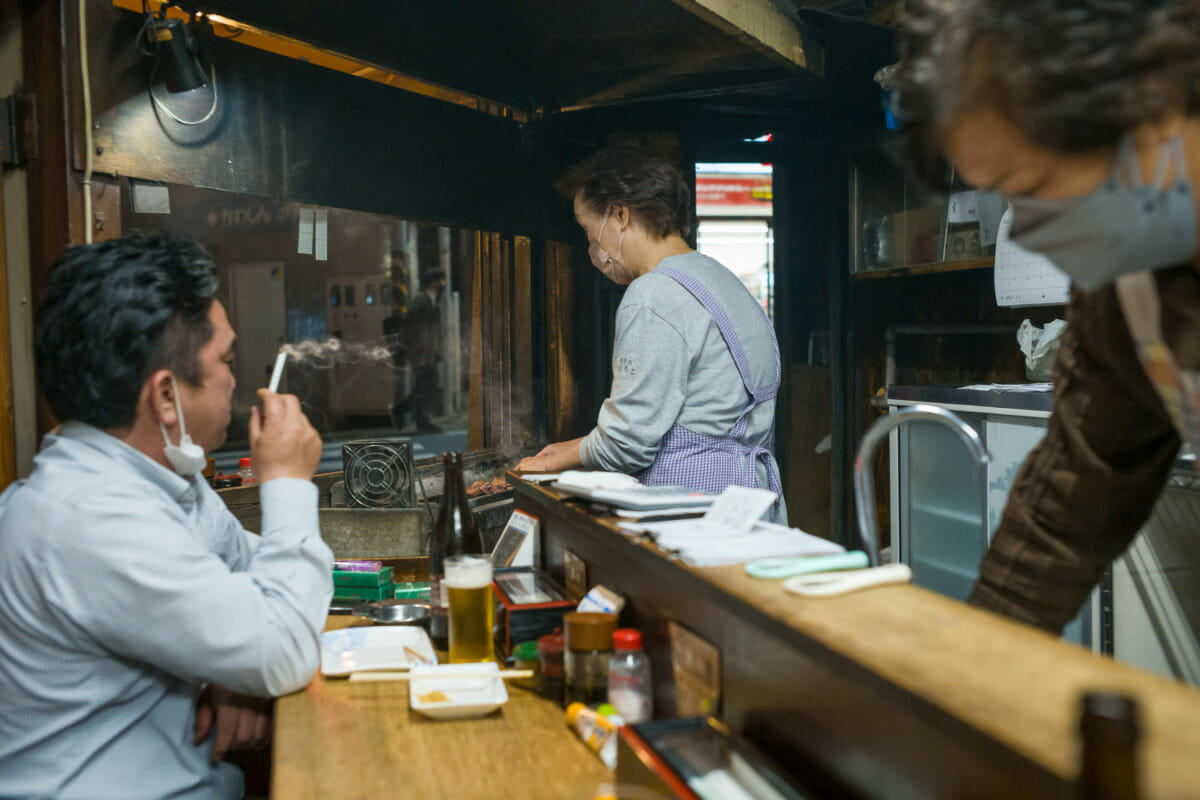 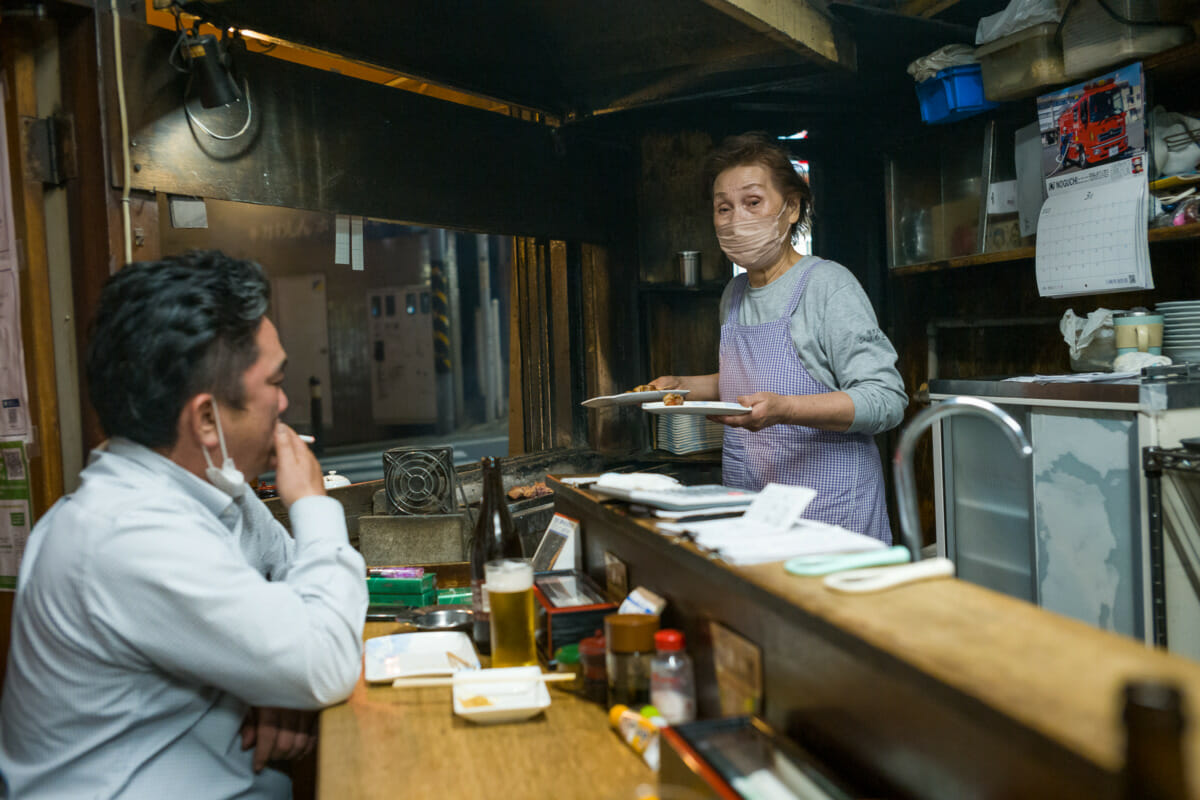 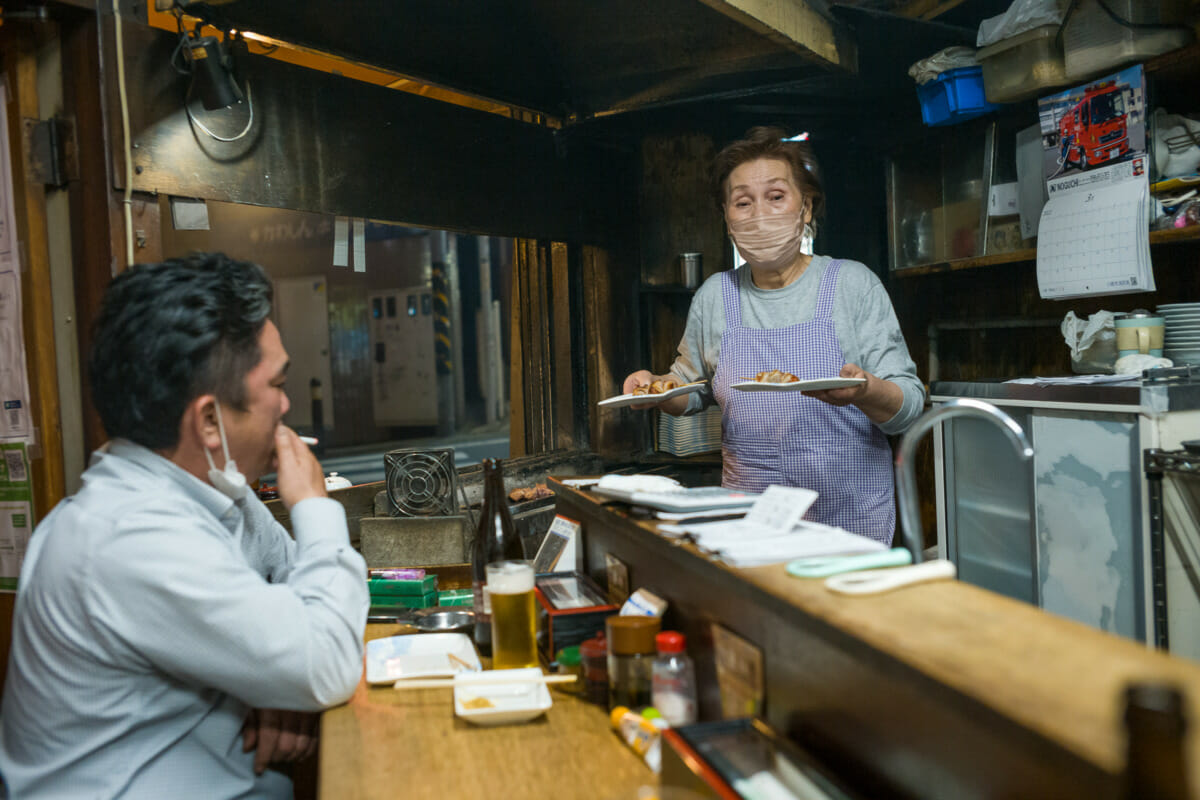 This shop has long been a favourite of mine. Sadly its stunning old sign — which I’ve included at the end — got destroyed in a typhoon several years ago, but even without it remains a truly wonderful looking little place.

A fella who lives opposite once told me it has been in business for 100 years or so and supplies some top-class restaurants. While feeding the wealthy, however, it’s still very much a local shop, and the woman in the photos came out of a house a few doors down. Perhaps unsurprisingly, no selection was necessary — they just chatted about the weather while he put her usual order in the Tupperware container she’d taken with her. An admittedly run-of-the-mill, everyday occurrence, but at the same time one that was lovely to see and somehow quite reassuring. 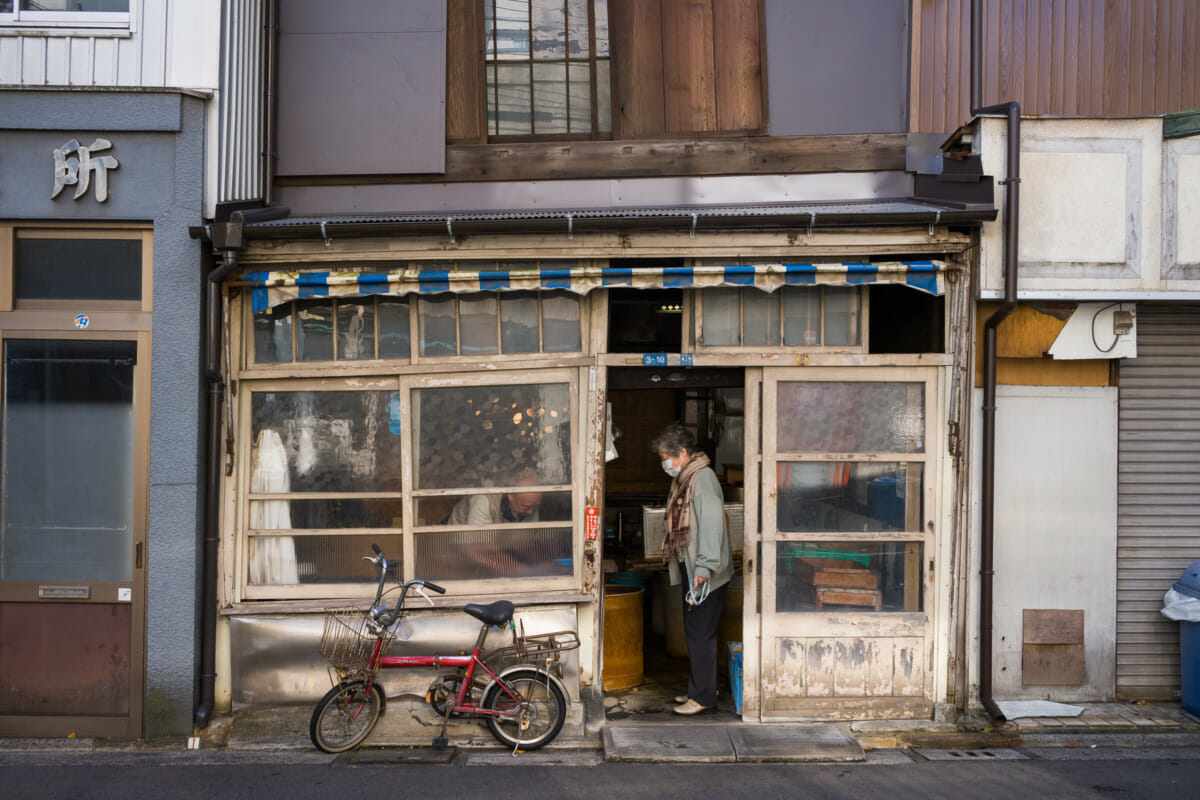 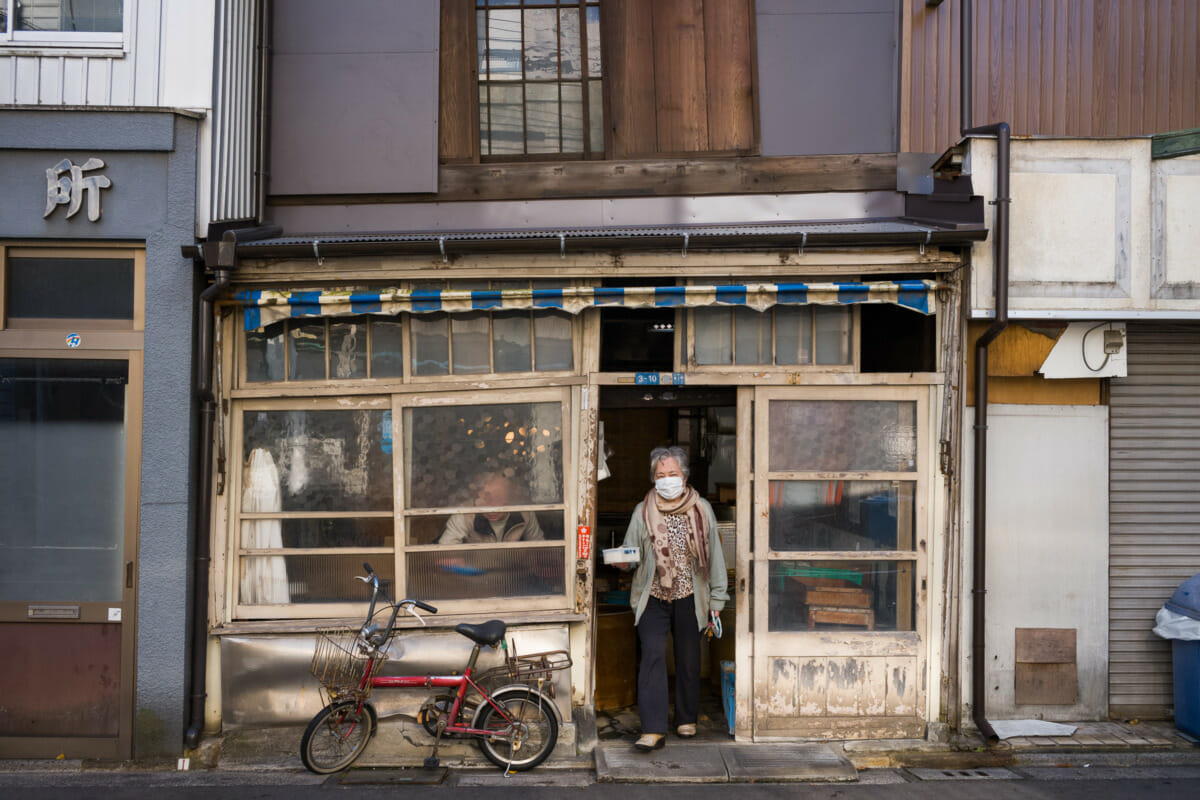 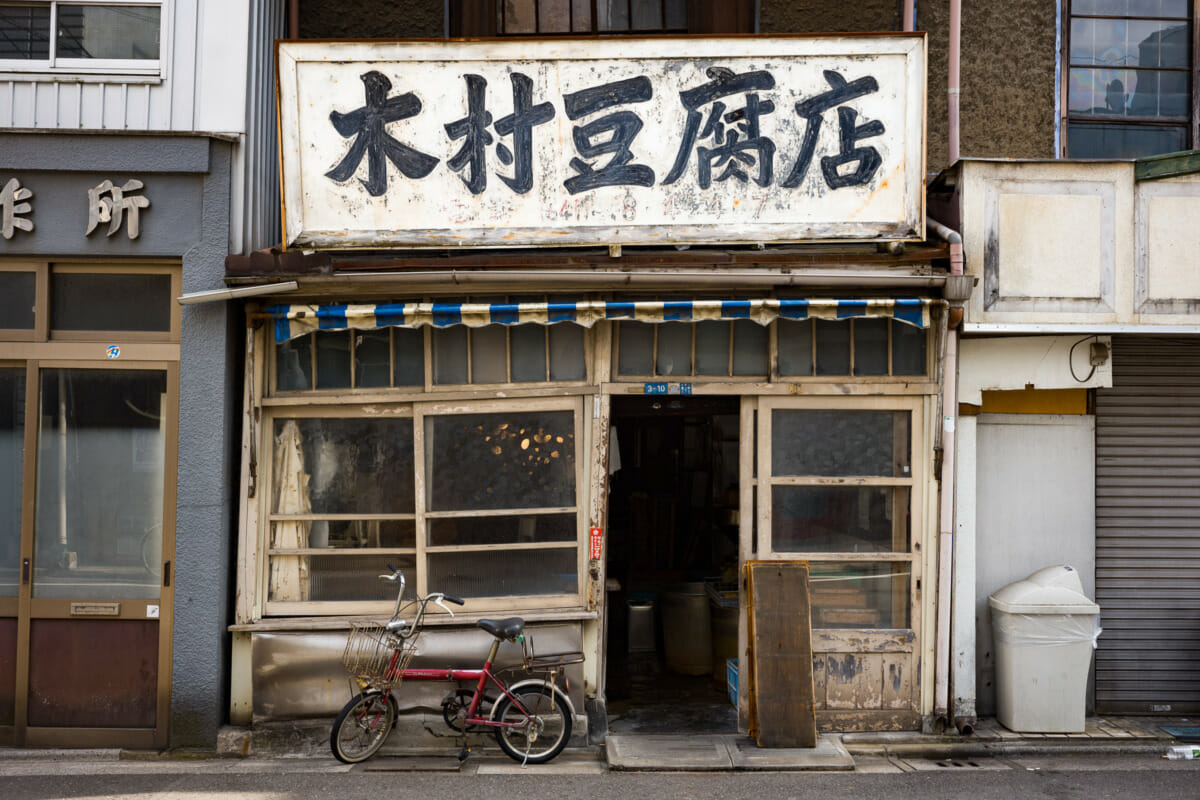