Tokyo’s cherry blossoms are now well on their way to full bloom beauty, but, after everything that the country has been through, celebrations this year will, in many instances, be very subdued. In fact, some of the city’s popular hanami spots have curtailed activities, while others have asked people to simply not participate, or at the very least, do so quietly. A move that manages to strike a balance between those who feel that some kind of fun would allow people the much needed chance to blow off some steam, along with the equally valid point that exuberant celebrations could be deemed disrespectful.

Such a sensitive, common sense approach, however, is one Tokyo’s happily racist governor, Shintaro Ishihara, is clearly incapable of; the bespectacled bigot instead proclaiming, “This is not an era in which people at this time of year may drink viewing cherry blossoms, even during daytime.”

Comments that, although a little extreme and unnecessarily dictatorial, can still be viewed as the wishes of someone who just wants the capital’s citizens to be aware of those who, whether directly or indirectly, are still suffering from the devastating earthquake and tsunami. The trouble is though, only four days after the catastrophe, Ishihara declared the events of March 11 to be “divine punishment”. Then elaborating further by adding, â€œTaking advantage of the tsunami, Japanese people should wash away their selfish greed. I think that the tsunami is a punishment from Heaven.â€

Contrasting comments that display a level of hypocrisy that’s rare even amongst politicians, and a degree of insensitivity that is simply staggering. Actually, insensitivity really isn’t the right word, although I’m not at all sure what is.

But of course, people don’t need to be told what to do. Similarly, they are more than capable of deciding what is appropriate. And when. For some that’s a few drinks with friends and family, whereas for others, it’s the equally relaxing practice of painting some pictures. 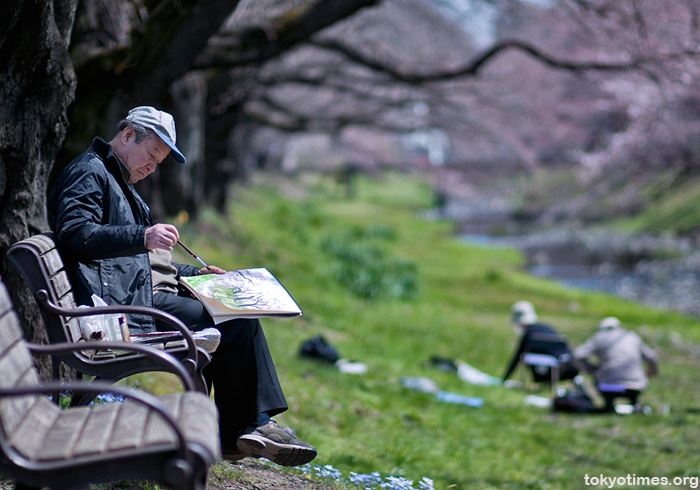