Somehow I think the subway snoozer’s chin stand is one gadget I will have no problems resisting. 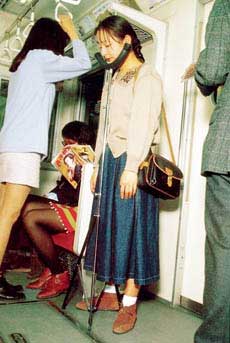 It almost looks like the woman has suffered a horrific injury, or is wearing the world’s largest brace, rather than using a device that will supposedly allow her to sleep. Plus I think it would be hard to doze off when everyone around you is furtively staring and wondering what on earth you are doing.

This bizarre gadget was invented by Kenji Kawakami, who it turns out is a kind of chindogu master. A chindogu apparently being an invention that is almost completely useless. Or as Mr. Kawakami likes to say, unuseless. Which I’m guessing is a joke of sorts. A joke seemingly comparable with his inventions!

Yet from what I’m led to believe, this chindogu champion has built up a cult following over the years, and has come up with around 600 inventions. Most of them being as preposterous as the subway snoozer’s chin stand.

Although with his baby duster, I have to confess he might just be on to something. 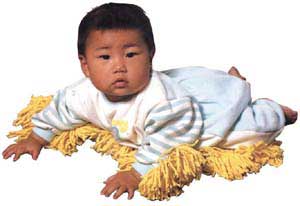