Perhaps proving just how efficient its stain removal service is — and at the same time justifying the ‘plus’ boast — the dry cleaning shop below appears to have laundered this sign so much that the ‘e’ and ‘a’ have been completely eradicated. 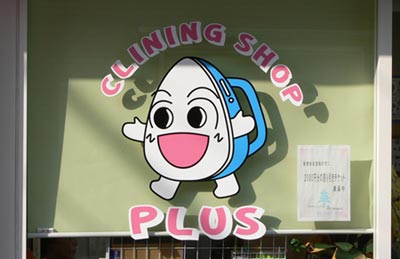 Rather embarrassing it has to be said, although such a simple spelling mistake is nothing compared to the potential pitfalls of a visit to such an establishment — at least for an unsuspecting non-native. Fresh off the boat at the time, but due to the summer humidity possessing less than fresh clothing, I valiantly ventured into a store offering similar services; the price list below displaying the very reasonable rates on offer. 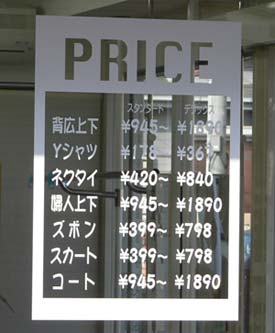 Unfortunately I couldn’t read anything other than the prices, but the second option seemed fairly obvious, if a little unusual: ‘Yã‚·ãƒ£ãƒ„’ simply had to be ‘Y-fronts’ (briefs), the super low price of 178 yen appearing to confirm this. Thus, armed with a few shirts and a parcel of pungent pants, and pleased at avoiding a gruelling boil wash, I sheepishly handed over my cleaning.

The resultant awkward silence was excruciating — broken only briefly by a barely suppressed giggle from the lady behind me — until at last the crimson-faced woman in charge managed to explain that underpants were unacceptable, tentatively pushing the opened bag back in my direction. Frantic gestures and embarrassed pointing eventually revealing that ‘Yã‚·ãƒ£ãƒ„’ are actually shirts, and not the similarly (in my mind at least) named undergarments.

Presumably in fear of other unsuspecting foreigners presenting her with their pants, the poor lady had produced a helpful sign upon my return, displaying in no uncertain terms what was acceptable. And perhaps more importantly, what was not.* 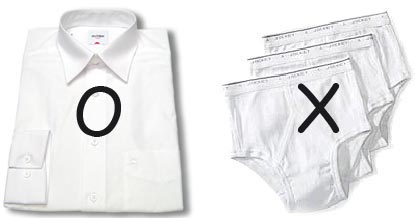 *Large parts of this story may have been exaggerated or even entirely made up in order to get some mileage out of a rather dull picture of a misspelled sign. Alternatively, this could be a ploy by the writer to desperately disassociate himself with an unpleasant underpants related experience.