Despite suffering often long and stressful journeys, Japan’s hordes of commuters (furtive fiddlers aside) aren’t exactly the most imaginative bunch. Well, not according to a nationwide survey that has been kindly translated by the always informative What Japan Thinks.

The study of 5,625 train travelers — which admittedly allowed multiple answers — found that a staggering 69.6% of commuters spend their journey sleeping. Both surprising and something of a feat considering that bagging a seat is generally a novelty; an occurrence to fondly remember on the majority of other, less fortunate treks. 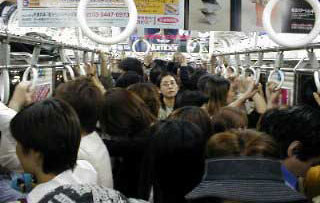 a rare, conscious commuter this morning

After sleeping, the second most popular pastime it seems is sending text messages. A practice that between naps a hefty 64.1% of train riders indulge in, quite possibly mailing other, similarly soporific slumberers.

Yet it’s only when we arrive at the third most regular routine that the word ‘unimaginative’ really rings true. Perhaps it’s the reason why people end up sleeping so much, but a whopping 62.2% of those questioned while away the hours by, erm, reading in-train advertisements. Now maybe I’ve got an attention span disorder, or my inquisitiveness in regards to cleaning products and diarrhea tablets is sadly lacking, but there has to be a more productive way of spending hour after hour, day after day, doesn’t there?

Apparently not it would seem, as sneaking in just behind playing mobile phone games is the mind-boggling dull commuting custom of ‘chewing gum and sucking sweets’. Those advertised on the train perchance? Either way, a hefty 44.9% of entertainment-starved travelers indulge in such sugar-based banality, monotonously masticating themselves silly.

a packet of gum last week

Now admittedly the list does include the rather more worthwhile habits of reading, listening to music, and even conversing with other commuters, but I’ve conveniently omitted them, as they have no amusement value whatsoever. Unlike ‘doing nothing’, which a rather worrying 14.9% of commuters do — or indeed don’t do — everyday.

And finally there’s the 0.4% of people who do ‘other’ things, which quite possibly brings us back to furtive fiddling again…