In the early hours of Tuesday morning last week, police in Saitama (just north of Tokyo) were informed about a potential break-in at a consumer credit card company branch.

Three officers quickly arrived at the scene, and found a man attempting to destroy an ATM. But using the steel bar he was trying to damage the machine with, the thief attacked the policemen, prompting one of the officers to fire 2 shots at him.

Needless to say both shots missed (although sadly we don’t know by how far), and the quick-footed criminal managed to escape on a nearby bicycle. Yes, not a high-powered sports car, but a bicycle!

Embarrassed police are now searching for the man, who they describe as in his 20s or 30s and wearing a black jacket. That should narrow it down a bit eh? Perhaps he also had black hair and Asian features. 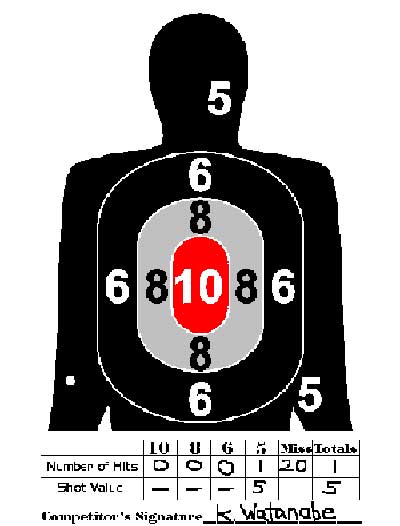 Above is a leaked copy of top police marksman Kenji Watanabe’s latest outing at the shooting range.