At the end of last year, The Washington Post published an article on Japan. Declaring it the coolest country on earth no less. It would seem that as far as the writer of the piece was concerned, Japan is the now the world’s number one trendsetter. Unfortunately the feature is now archived, and has to be paid for, but here is a short extract which gives you the gist of the article.

“Even as this country of 127 million has lost its status as a global economic superpower and the national confidence has been sapped by a 13-year economic slump, Japan is reinventing itself–this time as the coolest nation on Earth. Analysts are marveling at the breadth of a recent explosion in cultural exports, and many argue that the international embrace of Japan’s pop culture, film, food, style and arts is second only to that of the United States.”

If this all sounds a bit over the top. Think again. As one look at these hipsters pictured in Osaka over the weekend will surely dispel any doubts. 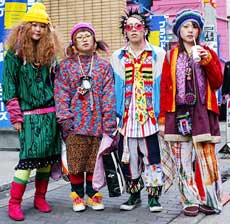