For the Zenkoku Teishu Kanpaku Kyokai (the National Chauvinistic Husbands Association), September 9th was considered an important date, as it marked the first ever meeting in Tokyo of the 260-member-strong organisation. An event that saw around 20 members gather outside Shinbashi Station to chant the group’s ‘Three Principles of Love’ — “Say ‘sorry’ without fear; say ‘thank you’ without hesitation; and say ‘I love you’ without shame.” 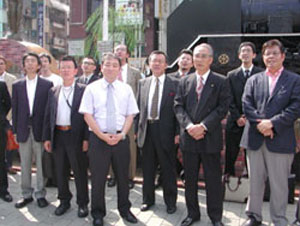 Based in Kurume, Fukuoka Prefecture, the association was founded in 1999 by Shuichi Amano, who got the shock of his life when he heard his wife was considering a divorce. “At that time, I realised I had no idea what she was thinking about even though she has been the closest person to me. The day after she told me what was on her mind, I started taking out the rubbish, cleaning the bathtub and paying attention to my wife.”

By creating the organisation, the 54-year-old hoped to help other Japanese husbands also floundering with their family duties, although in reality the focus of most meetings is to rank others on their behaviour and expressions of love — a system that rates husbands from a feeble first dan to an almost farfetched tenth, the latter’s dizzy heights only being achieved by one member.

1st dan: He is still in love with his wife after three years of marriage.

2nd dan: He helps out with the housework.

3rd dan: He has never cheated on his wife — or alternatively has never been caught.

4th dan: He is comfortable with a ‘ladies first’ policy.

5th dan: He can walk with his wife whilst holding her hand.

6th dan: He can listen to his wife seriously.

7th dan: He can solve problems between his wife and his mother in one evening.

8th dan: He is able to say ‘thank you’ without hesitation.

9th dan: He is able to say ‘sorry’ without fear.

10th dan: He can say ‘I love you’ without any embarrassment.

Relatively new member, Shoichi Oba, was lucky enough to achieve 3rd dan status immediately after joining, despite having something of a rocky past. “I used to think that my wife should obey me in whatever I told her. My relationships with my wife and daughter soured, and I thought they were wrong and that they should change. I decided to do something I had never done before: Now I wash dishes after breakfast and get up early in the morning to see my daughter off with my wife.â€ Such commitment to the cause recently leading Oba-san to apply for the rank of 4th dan, but long-term members turned him down, rather harshly claiming the 46-year-old needs to try even harder.

However such severity would presumably be supported by the owner of the organisation’s only 10th dan, Yoshimichi Itahashi; a 65-year-old who claims that the key to becoming a loving husband is to understand your wife’s loneliness, sadness and complaints.

Yet when allegedly quizzed about his views on the perennial toilet seat up or down dilemma, the marital master was unusually non-committal.