â€œJapanese are maniacs for booms, but people forget here that dogs aren’t just status symbols. They are living things.â€

Toshiaki Kageyama, a professor of veterinary medicine, commenting on the current canine fad in Japan, and the uncontrolled inbreeding practiced by many unscrupulous breeders in an attempt to produce the ‘perfect’ pooch.

An issue however that doesn’t seem to bother Japan’s growing number of dog lovers, as whether a newly purchased puppy has a brother for a father or a sister as a mother appears to be irrelevant — the cuddly little canine being as cute as a button the main concern. 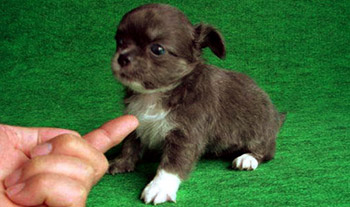 And as prices for a Chihuahua with a blue hue or a poodle that’ll fit in one’s pocket reportedly go all the way up to the 1 million yen mark (4,350 pound), proud owners are prepared to pamper their new pooches like never before. A fact not lost on Pet Esthe, a business whose dog dye now seems sadly defunct, but its other products cater perfectly for the crowds of crazed canine lovers.

Like this doggy mud bath for example, designed to replenish the little one’s skin and coat. A treatment that may also be cleverly combined with company’s aromatic essential oil series. 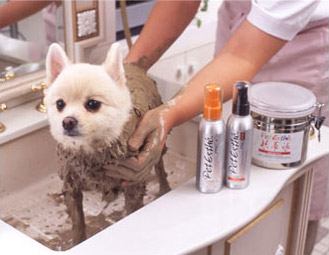 And if that’s not enough, relaxed and replenished Rover can then be spoiled further with a spot of nail treatment. A choice of ten colours enough to please even the most discriminating of dogs. 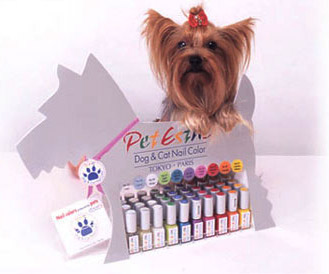 A product that not only looks pretty but helps protect the animal’s nails when the little fella is out and about. And it washes off easily too, which is reassuring.