Over the Golden Week holidays, it’s estimated that around 600,000 people will go and pay homage to their cartoon gods at Tokyo Disneyland.

Now I’ll admit that I’m no Disney fan, but going there during the holiday season is sheer madness. Unless of course you revel in standing in line for hours on end for a rather tame ride that will be over in seconds. Or alternatively have an uncontrollable obsession with grown adults dressed as vermin.

Yet somewhat surprisingly it was at Tokyo Disneyland that I experienced my only real case of extreme culture shock. Yes, I admit to going once, but it was purely for research ok? And perhaps more importantly I was given a free ticket. But anyway, at the end of my day at Disney, I foolishly entered a souvenir shop. A decision I regret to this day, as I found myself in the middle of what can only be described as a gift-buying orgy. Honestly, I have never seen anything like it (and hopefully never will again). People were running around literally grabbing any souvenirs they could lay their hands on. And needless to say any sense of etiquette or decorum was non-existent, as customers shoved and elbowed their way towards another potential purchase.

To say it totally freaked me out is no exaggeration, and I just had to leave the shop as quickly as I could. It was simply unbelievable. I kind of wish I’d had a camera with me, but at the same time I’m relieved I didn’t. The memory is still disturbingly clear, and hard photographic evidence is really not necessary.

With the huge numbers that are expected there this week, the mere thought of going anywhere near the place makes me shudder! 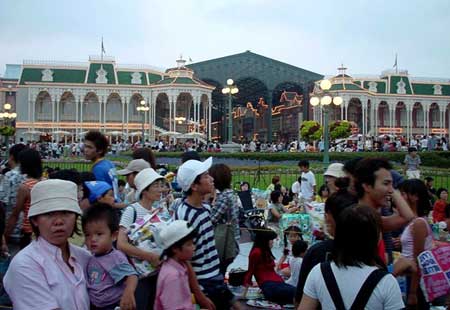 A lull in the crowd yesterday