Despite his age, Doraemon is still incredibly popular in Japan. And whilst not really a fan, I do know that the blue and white robotic cat has a magic pocket. And it’s magic because despite being small in appearance, it is capable of holding a vast number of gadgets. 1,963 to be exact. Well, according to Professor Yasuyuki Yokoyama that is.

Mr. Yokoyama (who obviously has a pretty cushy number at his university) has took the time and trouble of counting the gadgets from all the Doraemon comics ever published. A whopping 1,344 in all. 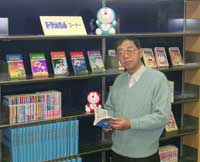 Some of the gadgets include a wherever door, a transportation device, and a personal copter. But despite the obvious expense of such devices, they do apparently break down every now and again. And according to the Professor, â€œThis is the very message of the cartoonist. The gadgets give children big dreams and tell them that you cannot get a life by just using gadgets.â€

Maybe Mr. Yokoyama should listen to his own advice from time to time. Especially the words get and a life.