This year sees Hello Kitty celebrate its 30th anniversary. And perhaps because of the cat’s incredible longevity, it’s arguably not all that surprising to find that many of the feline’s most ardent admirers are in their 30’s and 40’s.

One such fan (or more accurately obsessive) is 31-year-old receptionist Asako Kanda. As a young child she bought a few kitty-chan items, such as pens, books, etc. And by the time she reached 10 or 11 her interest had become more pronounced, with a Hello Kitty mug made in pottery class, and a similarly patterned apron in home-economics. Yet for many girls this would not be a particularly unusual story, but in the case of Kanda-san the obsession didn’t gradually fade with age. Rather it got stronger. Much stronger in fact.

In her Kitty-goods packed (and sickeningly pink) apartment, the feline fan said that, “Kitty has always been with me, almost subconsciously.” And with the recent earthquakes in Niigata, she worries about what will happen to her kids should there be a major tremor. These kids being the huge number of Kitty soft toys she has amassed over the years.

However with Sanrio (the company behind Hello Kitty) making the most of such fans, Kanda-san doesn’t have to worry about Kitty-chan only being with her subconsciously. With Kitty toasters, TV’s, pens, and pans, she can be with her favourite character almost all her waking hours. In fact on the rare occasions she isn’t surrounded by Kitty paraphernalia, Kanda confesses to feeling stressed. 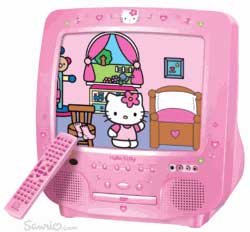 But the cat crazy receptionist says the relationship is not completely one-sided. When her father became ill and underwent an operation a few years ago, she claims that, “looking at my Hello Kitty handkerchief, I felt as if she were calling out to me, ‘don’t worry, everything will be fine’.” Similarly, a Kitty pillow (shaped like the face of the character) gave Kanda-san hope and support when one of her bosses was sexually harassing her.

As extreme (and disturbing) as some of this is, I guess you can say it’s relatively harmless. And if it has helped the woman out in a few bad situations, then fair enough. But Kanda-san’s dream of a Kitty-shaped house with two ears sticking out of the roof is a little disconcerting. Although perhaps more so is her wish for a Kitty-style funeral complete with a Hello Kitty tombstone.